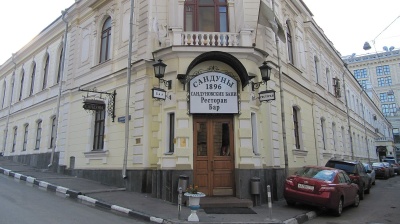 The Sanduny banya in Moscow close to Red Square is a legend, where large men sip beer and scoff down huge plates of prawns wearing nothing but a white towel and a felt hat to stop the top of your ears burning to a crisp in the 100C-plus sauna.
By bne IntelliNews May 27, 2021

Slap. Thwack. Sizzle. Hiss. Long and deep exhalation of breath. This is the backtrack to the Russian banya.

I’m in the Russian Bathhouse in Belgravia, submitting myself to the high-heat, ritualised beating with birch twigs they called the parenie. The furnace and flagellation treatment lasts barely fifteen minutes but the intensity is such, there are several points at which I find myself thinking ‘I shall surely die’. Each time, though, cool water poured from the banya-master’s ladle onto the venki leaves through which I breathe, brings me back from the brink of extinction. Afterwards, unsteady on my feet, the banshik leads me out of the parilka like a shire horse and a big barrel of icy water is tipped on my head. Strangely, the cumulative effect is turbo-exhilaration, like being plugged into the National Grid.

Short of poisoning an exiled dissident or laundering petro-dollars through South Kensington real-estate, going to the banya, especially this one, is about the most authentically Russian thing you can do in London. But I fell in love with the whole shebang – the refinements of etiquette, the faintly ridiculous, felt cloche hats, the madcap notion one sweats out beer faster than one drinks it – in Moscow. Feeling rough after a night on the tiles, heading to the famous Sanduny banya was the best way to reinvigorate oneself. Unfortunately, one would emerge a few hours later feeling so reinvigorated another night on the tiles was irresistible and it became a hopelessly addictive, Russian Catch-22 of sorts. I loved it so much I built my own sauna at home and christened it The Crucible: in there, impurities are burnt away. Some of them anyway.

To grill on the top shelf of the sauna while a mountainous man swung a damp towel round to stir up a heat so fierce one’s eyeballs liquified and nipples smoked was to mainline the Rodina. Sipping chai or a beer in between stints in the sauna is the Russian equivalent of the quick pint after work and infinitely superior, if you ask me. Stripped of material possessions and worldly accoutrements, the banya is a great equaliser in this most inegalitarian of societies. ‘Ve banye nyet generalov’: ‘In the banya, there are no generals.’ Oligarch and banker, biznisman and broker sit anonymously side by side.

Adhering to maternal advice, I never talk to strangers but I make an exception in the banya. Striking up a casual conversation with someone on the bench adjacent, I note two things: words travel slowly in thick, baking heat; and loving Russia while loathing the Kremlin is not the paradox it seems.

In truth, for all its architectural elan, the Sanduny in Moscow looked a little dilapidated and frayed around the edges last time I visited and it always exuded a faint whiff of vice. In contrast, the Bathhouse in Belgravia is all understated luxury and looks destined to become the social HQ of Russians in exile, the capital of Londongrad. Amid the leather banquettes and booths of the lounge, the clientele is mostly whispering Russian in conspiratorial, liturgical tones while the occasional tourist is heard asking: ‘What’s the deal with the hat?’ It makes for fascinating people-watching. Wealthy tycoon with his wife in the corner? Or a gangster and his moll? It can be hard to tell the difference in Moscow. In the banya it’s impossible. It’s all too discreet.

Historically, the banya was a place where gossip was exchanged, business transacted (legitimate or otherwise), politics discussed and deals done. The hot box is a place to speak privately, among other things. Boris Yeltsin, to whom a hangover was not unfamiliar, locked himself into the sauna with a bottle of vodka in an unorthodox suicide bid. Putin conducted sauna diplomacy with Gerhard Schroder and related a thoroughly unhilarious and frankly unbelievable anecdote of the time when the sauna burnt down – but the German chancellor insisted on finishing his beer before leaving. When Spitting Image wanted to host a three-way summit between Putin, Tramp and BoJo puppets, the setting they chose was the banya. By removing the power suits and security detail, leaders look all too mortal in the flesh.

In a few weeks’ time, Presidents Biden and Putin will meet in Geneva for a summit, the importance of which cannot be overstated. They have a lot to discuss. The history between these two men is characterised by mistrust and barely concealed antipathy. Their worldviews are diametrically opposed. Putin’s backing for Donald Tramp was explicit. Biden thinks Putin is a killer. The visuals of the last superpower powwow in Finland were disastrous for the USA and the theatrics of this one will be choreographed minutely to avoid a repeat.

I have a suggestion. In the middle of Lake Geneva there’s a public sauna. I know because every time I visit, I use it. After a session in the sudatorium, you can jump in the lake and cool off. I propose the two leaders should ditch the conga-lines of advisors and sycophants trailing them, shed the suit, tie a towel around the waist and sit down sweatily, side by side, in the sauna. Bereft of power’s trappings and posturing stage management, a candid conversation could take place, mano a mano. The banya is the place to find common ground.

Russia's CBR ups rate by 50bp to 5.5%, will keep hiking
Belarus is the “North Korea” of Europe, says US diplomat
ING: So what is a greenium and how do we get to it?

The price faced by Russia for aggression must be too high for the Kremlin to countenance, and this is the message that Biden should deliver to Putin – and act upon.

ING: Hungary seems all set for a record year in 2021

The Statistical Office has revised up the first-quarter GDP growth for Hungary to 2.0% quarter on quarter. The strong start and details suggest we are likely to see the economy growing by around 7.4% this year.

RIMMER: Peker has him in his pocket

COMMENT: Time to end Putin's impunity
2 days ago
COMMENT: CEE national recovery and resilience plans – the focus, the gaps and what comes next
2 days ago
MOSCOW BLOG: Primary rehearsal
5 days ago
ING: Hungary seems all set for a record year in 2021
5 days ago
RIMMER: Peker has him in his pocket
9 days ago