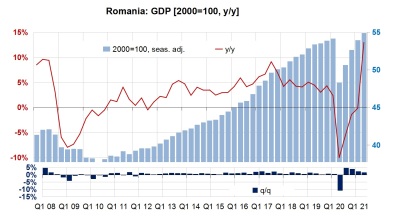 By Iulian Ernst in Bucharest September 8, 2021

Romania’s GDP advanced by 1.8% q/q in the second quarter of the year, marking a 13% annual advance compared to the same period of 2020 — the ‘lockdown quarter’ — and in seasonally adjusted terms it is 1.4% above the pre-crisis peak (Q1, 2020) according to the first round of detailed Q1 GDP data released by Romania’s statistics office INS.

On the utilisation side, the domestic consumption rose by 8.1% y/y while the gross fix capital formation (investments) soared by 12% y/y.

Given the very different sizes (in favour of consumption), however, consumption made a contribution to the overall growth that was more than twice the contribution made by investments (6.1pp versus 2.5pp).

Both exports and imports advanced by as much as 40% y/y in Q2 as foreign trade resumed after lockdown, but this does not bode well for the country’s trade balance.

The external deficit adds to the wide public deficit prompted by fiscal stimulus and structural issues, creating a risky combination.

While the annual GDP growth rate may be misleading, the growth rates over the past 24 months show better where Romania’s economy has reached after last year’s shock.

The performance was highly uneven among sectors: IT&C posted a 30% advance while the entertainment industry showed a 35% contraction.

The construction sector has advanced by 10% over the past two years.

On the utilisation side, total consumption in Q2 still lags 3.2% behind the level reached two years ago, while the gross fixed capital formation advanced by 14.5%.

In terms of external balance, the situation has worsened as exports advanced by only 0.5% (over the two-year span) while imports surged by 8.7%.