Romania’s debt-to-GDP ratio 2.5pp down y/y as of end-August 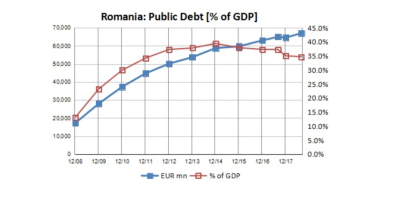 Romania has added €2bn to its public debt in the past 12 months, bringing it to €66.9bn (34.7% of GDP) as of the end of August, according to the finance ministry. The country will add more debt in the coming years, which, amid the expected slowdown, might put the country’s robust indebtedness metrics under pressure.

The debt-to-GDP ratio dropped by 2.5pp to 34.7% at the end of August, but the figure partly reflects the inertia in the methodology used for calculating it.

The 12-month rolling GDP (used for calculating the ratio, under ESA methodology) still increased by 6.1% y/y in real terms as of June: which is the latest available data, used for August debt ratio as well. The GDP growth is likely to ease to 3.5% in H2 of 2018 and 3% in 2019.

The drop in the debt-to-GDP ratio as of August is also due to the local currency’s strengthening in real terms versus the euro over the previous 12-month period. The GDP deflator doubled to 6.5% y/y in Q2 this year from 3.2% y/y last year, while the local currency weakened (nominally) by only 2.2% in Q2 this year and 1.2% y/y last year prompting significant real appreciation. But the currency strengthening over the past years of robust GDP growth might be followed by a correction episode induced by the economic slowdown and widening external balances.

Nonetheless, Romania’s public indebtedness is currently at a very safe level of under 35% of GDP and even significant deterioration over the coming couple of years will not bring it deep in the risk area of over 40%-of-GDP. Proper prioritisation public investments to infrastructure works accompanied by central bank avoiding excessive monetary tightening could, however, improve the macroeconomic dynamics in the sense of closing the external deficits and keeping the public indebtedness within moderate area. The developments over the first two years in office of the Social Democratic (PSD) - led coalition does not support such optimistic expectations, though. A chain of elections for the European Parliament, local, parliamentary and presidential elections in 2019-2020 will create a rather complicated political context. 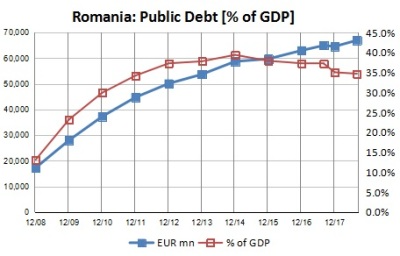