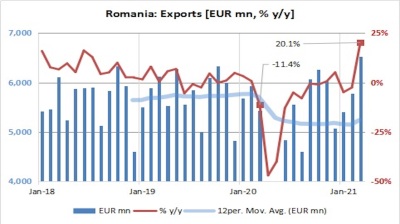 The y/y growth was partly propped up by low base effects one year after the lockdown froze the global supply chains in the first quarter of 2021, particularly in March, but remains impressive nonetheless, as it represents a 3.2% annual advance compared to March 2019 (two years earlier). The chronic wide deficit overclouds the strong performance of exporters, largely because of the expansion of Romania’s two car factories, Dacia and Ford, despite the semiconductor crisis.

The 6.5% increase in the export of transport means (automobiles, mainly), which accounted for nearly half of total exports in the quarter, made a critical contribution of 3.2pp to the overall 3.9% y/y advance.

Notably, the imports generated by the domestic demand for investments under the Recovery and Resilience Fund (RRF) have not begun yet, but they are expected to further push up the country’s trade gap.

Romania’s industry returns to pre-crisis maximum, but some sectors may never recover
Once buoyant Romanian wages show signs of fatigue
International banking groups look to expand in Central and Southeast Europe despite pandemic

Romania’s industry returns to pre-crisis maximum, but some sectors may never recover
6 hours ago
Once buoyant Romanian wages show signs of fatigue
1 day ago
Russia's CBR ups rate by 50bp to 5.5%, will keep hiking
3 days ago
Moldova’s headline inflation rises to 3.1% y/y and is going up
4 days ago
Serbian central bank keeps key policy rate unchanged
4 days ago