Romania’s GDP rises by 1.8% q/q in Q2, below expectations 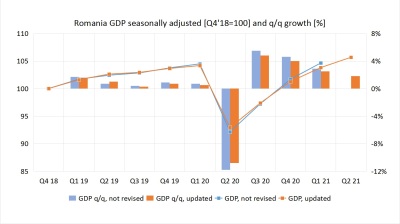 Romania’s seasonally-adjusted GDP increased by 1.8% q/q in Q2 after the 2.5% q/q (revised from 2.9% q/q) advance in Q1, according to the flash estimate released by the statistics office on August 17.

The annual growth rate spiked at 13% y/y, an effect of the lockdown that crippled the economy in the second quarter last year.

The growth rate was slower compared to consensus expectations for growth rates of around 2% q/q and above 14% y/y.

Consequently, independent analysts have toned down their optimism, while still expecting a full-year growth in line with the government’s official 7% projection.

The less buoyant outlook may help the central bank defer the hiking of the refinancing rate until November, ING Romania’s chief economist Valentin Tataru said. The bank maintains expectations for 7.5% growth this year with significant (yet more moderate than before) upside risks, and 5% growth in 2022.

ING’s Tataru explains the recovery by the “revenge spending” in the private sector and public investments.

BCR bank revised downward its forecast for Romania's growth this year to 7.4% from 8% previously.

Prime Minister Floirin Citu saluted the performance. "We promised that Romania will have a rapid economic growth, a V-shaped return. Thank you, dear Romanians, it is the fastest return that Romania has had,” he said.

Citu announced the figure that bodes well for his campaign for the top position in the National Liberal Party — and he was right, but it was the toughest pandemic Romania has ever had, as well.

On a more cautious note, Ziarul Financiar daily quoted analysts warning of economic overheating: the trade deficit is growing sharply (it will exceed €20bn in 2021 for the first time since the previous economic crisis) pushing up the current account deficit, while the budget deficit remains at the level forecast as a share in GDP (7.1%) despite much brighter recovery outlook.

There are two elements that put the economic recovery into perspective. Firstly, the GDP, in Q2, increased by only 1.7% compared to the second quarter of 2019. Recovering above pre-crisis peak is an achievement, furthermore reached faster than initially expected, but the growth is still fragile. Overheating is not common at such small growth rates, but not impossible if the domestic supply is overwhelmed by robust demand for more than a transitory period of time.

Secondly, the 1.8% q/q growth in Q2 overstates the actual quarterly growth because the indices used for the seasonal adjustments were “contaminated” by the lockdown, which resulted in an abnormal decline of GDP, in the second quarter of last year.