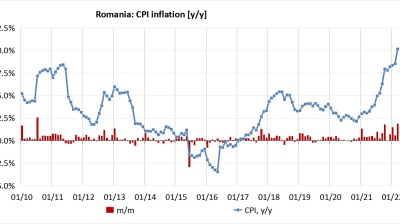 The annual inflation rate in Romania advanced to 10.2% y/y in March, compared to 8.5% y/y in February, the statistics office INS announced.

Consumer prices increased by 1.8% in March alone, pushed up by a 2.5% advance in the food prices.

The advance was steeper than expected, even if the National Bank of Romania (BNR) announced an upward revision of the projected inflation forecast, and it is expected to accelerate the monetary policy tightening.

"Inflation accelerated above the median of the Bloomberg poll of 9.60% and above our 9.59% forecast. The forecast error on our side came almost exclusively from basic foods," according to Ciprian Dascălu, chief economist of BCR.

The price of edible oil increased by 5.9% in March alone, while prices of flour and baked goods increased by 4-5% in the month as well.

The central bank should continue to intervene in the next meetings to curb rising inflation, commented Cristian Popa, a member of the BNR board, adding that “prices have exceeded our darkest expectations”.

Poland’s CPI growth rate picks up just 0.1pp to 15.6% y/y in July
23 hours ago
Romanian stock exchange reaches new record as BET-TR rises 5.7% ytd
1 day ago
Population decline to take Emerging Europe back to the early 20th century
1 day ago
Russia’s international reserves up $3.6bn in one week to $571bn
1 day ago
CPI inflation in Moldova hits 33.6% y/y in July
2 days ago