Romania’s opposition fails to capitalise on strife within ruling PNL 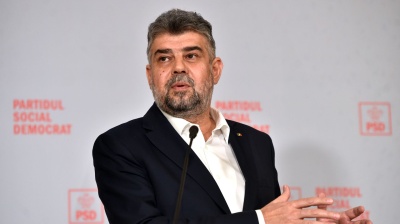 Romania’s main opposition party, the Social Democratic Party (PSD), will hold off from filing a no-confidence motion against the government as it has failed to secure the support of enough MPs.

The PSD had previously mulled filing the motion at a time when the ruling National Liberal Party (PNL) was weakened by an internal power struggle.

However, PSD president Marcel Ciolacu said on August 30 that the party will only file its no-confidence motion when it has the 234 votes needed for it to pass.

He also called on “millions of Romanians” to take to the streets to overthrow Prime Minister Florin Citu’s government.

"We decided unanimously that we will submit the motion of censure when we have the 234 votes necessary to pass this motion. Let me be very clear, at this moment the opposition party has 204 votes. A government can only fall through a motion in parliament or if millions of Romanians take to the streets and demand the resignation of this government. There is no other way,” said Ciolacu, reported Digi.24.

Ciolacu said the PSD wants to remove the government led by the centre-right National Liberal Party (PNL) because of price increases, the freezing of salaries and pensions and the government’s management of the vaccination campaign — Romania has one of the lowest vaccination rates in Europe and has been selling vaccines to other EU members before they expire unused.

The ruling PNL is currently mired in an internal power struggle as Citu and PNL leader and former prime minister Ludovic Orban battle for control of the party ahead of the leadership election in September. During the campaign details of Citu’s alleged youthful misdeeds surfaced in the Romanian media, which reported the prime minister had a conviction for drunk driving and an unpaid credit card bill from his time as a student in the US.

Speaking on August 30, Ciolacu called the prime minister a "convicted criminal" and a "goat".

The outcome of the leadership race remains unclear. Citu has won some minor victories along the way; notably his candidates won elections in 28 county organisations, compared to only 15 where incumbent leader Orban’s people won. However, Orban has better connections with the lower echelons of the party, which will work in his favour when the party votes next month.

The situation within the PNL has also caused problems within the ruling coalition, where the PNL is the senior partner alongside the reformist USR-Plus and Democratic Alliance of Hungarians in Romania (UDMR) that represents Romania’s Hungarian minority.