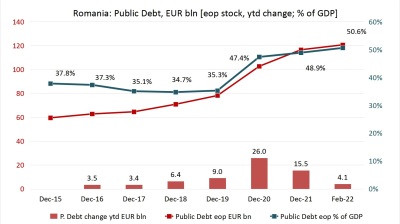 Romania’s public debt increased by RON20.3bn (€4.1bn) in the first two months of this year, to RON596.9bn, the Ministry of Finance has announced.

The debt includes the advance payment disbursed by the European Union on the €14.2bn loan component of the Relaunch and Resilience Facility (RRF), the ministry said.

Nearly €1.9bn was disbursed in January under the RRF, after the €1.8bn advance payment for the €15bn grants portion of the RRF was received in December.

In addition to this, Romania issued Eurobonds twice this year, in January and February respectively.

While the $2.4bn Eurobond issued in January was aimed at the refinancing of other issues maturing in January and February, the €2.5bn issue launched in February has directly contributed to the public debt’s expansion.

Romania’s public external debt reached 26.1% of GDP, 2 percentage points (pp) up from the end of December.