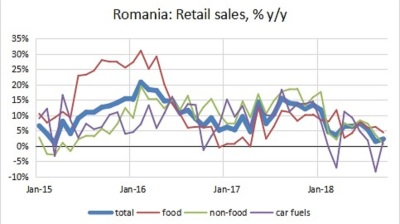 Romania’s retail sales index increased by 3.0% y/y (at comparable prices) in Q3, according to bne IntelliNews calculations based on data released by the statistics office.

It was the weakest performance in five years and the outlook remains grim amid the economic slowdown, rising interest rates and no room left for further fiscal stimulus (rather the contrary).

Romania’s retail sales had soared over the past year amid a combination of rising wages and VAT rate cuts. The government significantly increased wages in the public sector, while the higher minimum statutory wage prompted a similar move in the private sector with the outcome of a robust advance of households’ incomes. The low interest rates until last autumn contributed to consumer exuberance as well.

However, consumer confidence has gradually weakened and the government managed to maintain the pace of private consumption (and GDP growth) at the cost of even more wage hikes. This narrowed the executive’s room of manoeuvre as it now has to address the resultant fiscal slippage.

The January-September budget balance doubled in y/y terms and hit 1.8% of the GDP, but the worst is still to come in Q4 due to the seasonal pattern. The gap is likely to exceed 3.5% of GDP if this pattern is observed. Indeed, the military spending this year contributed to the budget gap this year beside the expansionary income policy. But this will not reverse in 2019, when even more contracts for missiles, armoured vehicles and multi-role frigates are going to be signed.

Notably, the non-food sales index, seasonally adjusted, decreased by 2.0% ytd as of September. The index, which best reflects households’ propensity for consumption, is at the same level as it was some seven quarters earlier at the end of 2016.