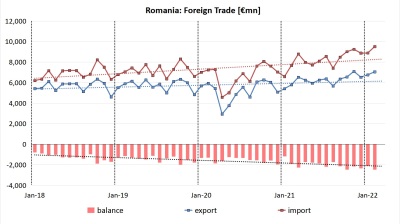 The external deficit is among the key elements that keep the country from getting a better sovereign rating, besides the public deficit. The inflation, driven by rising commodity prices, has a magnifying impact on the country’s foreign trade — exports, imports and deficit — but, eventually, it will diminish the domestic consumption with a positive impact on the trade gap.

Romania’s exports increased by 21.9% y/y in February and by 23.4% y/y to €13.8bn in the first two months of the year, the statistics office announced.

Import of mineral fuels surged by 2.4 times to account for 10.2% of total imports.

The import of chemicals, a major item in the structure of Romania’s imports, increased by 45% y/y and accounted for 16.2% of total imports.

Only the machinery and transport equipment section are more substantial on both the exports and the imports side (43% of exports and 33% of imports respectively).

Russia’s international reserves up $3.6bn in one week to $571bn
4 hours ago
CPI inflation in Moldova hits 33.6% y/y in July
17 hours ago
How do high gas prices push up the cost of power?
1 day ago
Russian inflation falls to 15.1% in July
1 day ago
Russia’s current account surplus hits new all-time high of $166bn
1 day ago