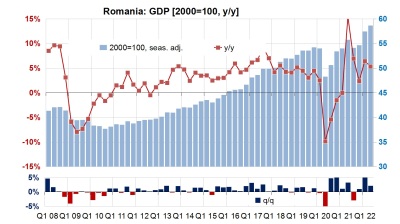 Romania’s GDP increased by 5.3% y/y in Q2 this year, driven by the services sector (including 24.2% y/y more value-added generated by the IT&C sector) on the production side and a significant increase in the inventory (by 10% of GDP in the quarter) on the utilisation side, according to the statistics office INS.

Romania’s economy marked a modest slowdown from the 6.4% y/y advance in Q1, resulting in an overall 5.8% growth in the first half of the year. Romania’s state forecasting body CNSP revised its forecast for the country’s economic growth this year in its Summer Forecast published on July 21 to 3.5% (up from 2.9% in the Spring Forecast) in 2022 and 3.7% in 2023 (down from 4.4% in the Spring Forecast).

The European Commission projected 3.9% growth, in its Summer Forecast issued in July as well.

“Private consumption and investments are set to be the main growth drivers for this year and the next, while net exports are projected to act as a drag on GDP and lead to a widening of the trade deficit,” the Commission’s report reads.

The overall Q2 growth figure published by INS on September 7 confirms the flash estimate published by INS in August, while the details reveal the drivers of the economic growth that prompted surprise among analysts that were expecting more modest economic performance in the second quarter of the year.

Other segments of tertiary economic activity contributed the rest of the growth: the services provided in the real estate market (+0.5pp) and other B2B services (+0.4pp).

On the GDP utilisation side, net imports accounted for 12.5% of the total domestic demand — an outstanding value not seen since 2008.

Total demand for consumption increased by 6.0% y/y, the slowest annual advance in five quarters (in line with subdued demand depressed by inflation and rising interest rates) while the gross capital formation soared by 28.7% y/y.- driven by inventory build-up, though.

Gross fixed capital formation advanced by only 2.5% y/y, nevertheless along a constantly improving pattern over the past four quarters.

The rise in inventory accounted, as previously mentioned, for as much as one-tenth of the GDP in Q2 — up from 8.7% in Q1 and the highest share in the past two decades.