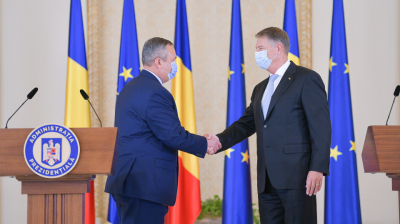 President Klaus Iohannis concluded on November 22 that a solid majority has been formed in the Romanian parliament, which includes the two largest parties in the parliament — the National Liberal Party (PNL) and the Social Democratic Party (PSD) — alongside the Democratic Alliance of Hungarians in Romania (UDMR) and MPs representing ethnic minorities. Iohannis nominated acting defence minister Nicolae Ciuca as prime minister-designate for a second time, tasking him with forming a government.

This would put an end to the three-month political turmoil that began in early September when former Liberal prime minister Florin Citu dismissed his minister of justice, a member of the reformist Union Save Romania (USR) overnight, forcing the USR to pull out of the ruling coalition.

The formation of a new government by November 25, a deadline mentioned by Social Democrat leader Marcel Ciolacu, now looks realistic — unlike the three-year lifetime for the coalition announced by the parties involved in the deal.

Unlike the first time he was nominated, when Ciuca was supported only by the Liberals, the nomination is now backed by a broad coalition.

"In recent days we have worked together with the other parties to be able to aggregate a governing programme and to form a solid coalition in the Romanian parliament, so that we can create a government that will ensure the stability of the country," Ciuca said following a meeting with Iohannis on November 22.

"Basically, Romanian citizens expect stability and solutions from us, in order to be able to solve the effects of the COVID-19 pandemic, the energy crisis and also to have a government programme that will be able to implement the decisions. necessary for the implementation of the [National Recovery and Resilience Plan] PNRR."

The parties have already agreed among them on sharing the posts in the government, with the Social Democrats holding the strongest representation: nine ministries, one more than the Liberals, while the ethnic Hungarians are assigned three ministries.

But the power of the Social Democrats in parliament is stronger than implied by the distribution of ministerial seats after a faction of the PNL headed by its former leader Ludovic Orban pulled out of the party. Furthermore, the incumbent Liberal leader Citu has come under fire from his own team, which sees the number of seats significantly diminished compared to during its previous coalition with USR.

Under the agreement between the PNL, PSD and UDMR, Ciuca will step down in July 2023 to let the Social Democrats’ representative take over as prime minister.

The Social Democrats will reportedly hold another key post in the government, that of the general secretary of the government office.

Furthermore, the Social Democrats promoted a package of social measures with an impact on the budget estimated at 1% of GDP, including higher pensions, child benefits and minimum statutory wage.

The leaders of the three parties of the emerging ruling coalition agreed on November 19 on several sections of the PSD’s ruling strategy including a social package covering these three issues.

The impact of the measures in the social package amounts to RON13.6bn (€2.7bn, over 1% of GDP), according to Ciuca.

The measures announced on Friday by Ciuca also include no tax increases in 2022 (a condition imposed by the Liberals) and no change to the so-called “flat tax” principle. Also, no luxury tax will be introduced.

At least 7% of GDP must be allocated to public investment, another PNL demand. Pensions will be hiked by 10% as of January, close to the Social Democrats’ request for an 11% hike.

The minimum pension will increase from RON800 to RON1,000, with an estimated budgetary impact of RON800mn.

Recipients of pensions of up to RON1,600 will receive a one-off subsidy of RON1,200 in January to help them withstand the increases in utility prices.

Recipients of pensions over RON4,000 will pay health contributions (10% of income).

The allowances for children over two years old will increase to RON243 from RON214, as the PNL insisted, rather than to RON300, as promised by the Social Democrats during the first days of negotiations.

A 13th monthly allowance will be disbursed to those with disabilities.

The minimum statutory gross wage will be RON2,550 and will be granted for a maximum of 24 months, to each employer. After 24 months, the employer must decide on either a salary increase (of a size not yet specified) or the termination of the employment contract. It is not known whether the regulation will contain a minimum size for the salary increase.