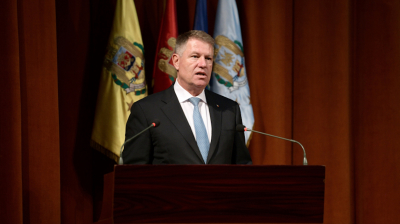 President Klaus Iohannis is seen as a shoo-in for re-election.
By Iulian Ernst in Bucharest November 8, 2019

The incumbent President Klaus Iohannis is seen as a shoo-in for re-election in the upcoming presidential election, leaving the main question — after one of the dullest presidential campaigns ever in Romania — whether he will face former prime minister Viorica Dancila in a straightforward race between centre-right and centre-left in the second round, or if he will compete against fellow-centre right candidate Dan Barna.

The presidential campaign has been heavily overshadowed by the dramatic events in the parliament, where Dancila, the leader of the Social Democratic Party (PSD), was ousted from power in a no-confidence vote on October 10. Her position as head of the party looks doubtful if she fails to perform well enough in the first round of voting on November 10 to make it to the second round.

While the only public debate among presidential candidates was avoided by both candidates with the strongest positions in the polls, Iohannis and Dancila, they took each other on indirectly in the confrontation in the parliament that resulted in the overthrow of Dancila’s cabinet.

Since then, a new coalition (albeit a fragile one with questionable longevity) backed by several formerly opposition parties and individual MPs has come to power headed by Ludovic Orban of the National Liberal Party (PNL) that is backing Iohannis in the presidential race. The coalition also comprises Barna’s USR, meaning the outcome of the presidential election will inevitably affect the balance of power within the new parliamentary majority.

The lacklustre presidential race this year is in sharp contrast to the heated contest four years ago when Iohannis defeated Romania’s then prime minister Victor Ponta after a last minute swing caused by widespread outrage over the government’s failure to ensure Romanians living abroad could cast their votes.

“Doing things well” was the slogan of Iohannis’ last electoral campaign, while this time he is running under the logo “For a normal Romania” — a reflection of the fact that many Romanians simply aspire to live in a normal, well functioning European society.

In the past few weeks, Iohannis has virtually boycotted his own electoral campaign, focusing his rhetoric on the no-confidence motion against the PSD and on the formation of a new government. When it comes to attracting votes, the president's moderation demonstrated over the past four years will be both his main asset and his main liability. He has stressed his efforts during his four-year mandate to fight against the “PSD’s attempts to destroy the rule of law” — and his traditional centre-right voters were happy with this.

Among the other main candidates, Dancila promises to continue the income-led growth pursued by her former government if elected and seconded by a Social Democratic government. She will benefit from the centre-left leaning part of the electorate that remains large because of the wide income disparities in Romania.

Meanwhile, Barna promises to "modernise" Romania, bringing entrepreneurs more prosperity. A Iohannis-Barna face-off in the second round would see the two fight to get support from mostly overlapping groups of voters, as the “old” and “new” politicians representing the centre-right. The emerging class of modern centre-right voters, mostly highly educated youth concentrated in first-tier cities, believe USR candidate Barna, running on the “entrepreneurship” slogan, would be a better choice.

Although the polls may indicate more contenders for the runner-up position, it has become increasingly evident that only Dancila and Barna hold realistic chances of reaching the second round.

Actor Mircea Diaconu is indicated by the polls (which are very inconsistent) as a possible opponent of Iohannis in the second round, but past elections have demonstrated that voters rarely choose “exotic” candidates although they might sympathise with them. Moreover, Diaconu, who has been campaigning with a moderate nationalist rhetoric, was backed by a coalition of various political vehicles including Ponta’s Pro Romania and the Alliance of Liberals and Democrats (Alde), which has since splintered.

Romania’s retail sales still 5.4% down y/y in May

Tens of thousands gather to demand the resignation of Prime Minister Boyko Borissov and chief prosecutor Ivan Gechev, accusing them of corruption and dependence on criminal groups.

Radev takes on Bulgarian government and chief prosecutor after raid on presidential offices. Protesters demand resignation of politicians they say are completely dependent on corrupt businessmen.

Confidence in the Z-Dream of rapid, deep and far-reaching reforms by Ukrainian President Volodymyr Zelenskiy that will transform Ukraine almost totally evaporated this week.