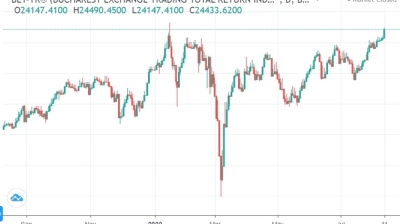 The BET-TR index, which reflects the evolution of the 20 most liquid securities from the Bucharest Stock Exchange (BVB) plus the dividends disbursed by companies, reached a new historical high of 24,433 points on August 11, exceeding the previous record of 24,212 points established in mid-January, Bursa daily reported.

Since the beginning of the year, BET-TR has grown by 5.71% ytd, recovering entirely from the fall that occurred in the context of the deterioration of economic prospects, the increase in interest rates by the central banks and the war started by Russia in Ukraine.

On the other hand, inflation in Romania reached double digits, which means that in real terms, the return of the index remained negative.

However, the nominal increase remains an outstanding performance, given that the BUX index (which is a total return type index that also takes into account dividends) from Budapest or WIG-20 from Warsaw are far below historical highs.

The better performance of BET-TR can be attributed partly to its structure, where the energy companies (helped by the current context) hold a large weight. The shares of OMV Petrom, Fondul Proprietatea — dominated by Hidroelectrica — and especially Romgaz posted consistent ytd performances.

More than 70% of Albanians trust the EU, the UN and Nato compared to only one quarter who trust the president or political parties.

Growth is expected to slow later in 2022 as the war in Ukraine affects tourism and other key sectors.

Demand is still poised to weaken in line with the overall economic slowdown.