Ruble firms to the dollar, but the exchange rates are not real 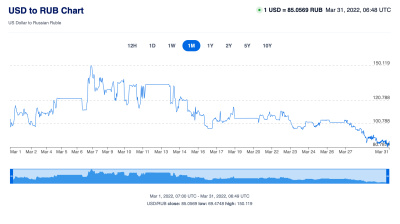 The Russian ruble has gone from RUB150 to RUB86 in the last two weeks, but the current strength is artificial, say analysts / xe.com
By bne IntelliNews March 31, 2022

The Russian ruble surged by more than 10% on March 29 in Moscow trading, following peace talks in Istanbul that seemed to have made progress and the Kremlin saying it would pull forces back from Kyiv.

The currency was trading below RUB83 against the dollar on the same afternoon – its strongest in a month of ultra-volatile trading for the currency, which has been targeted by Western sanctions. Following the invasion the ruble weakened to RUB150 in early March, a record low, before pulling back to around RUB100. The official exchange rate was RUB86 to the dollar as of the morning of March 31.

Before the war started on February 24 the ruble was trading at RUB80 to the dollar. Before the tensions started rising in October following a Washington Post story claiming Russia was massing troops on Ukraine’s border, the ruble’s fair value was estimated to be about RUB70 to the dollar.

The Central Bank of Russia (CBR) has been trying to bolster the value of the ruble against the dollar but analysts say the rate remains largely artificial, as the central bank has imposed strict controls over trading and used reserves to pump up the currency.

The goal, say analysts, is to create the appearance of a strengthening ruble to persuade Russians to stop selling their rubles for dollars and withdrawing their hard currency savings from banks. And the ruse appears to be working, as deposits at long-term bank deposits have risen in the last week, according to preliminary data from the CBR.

Amongst the measures the CBR has used is that of forcing exporters to surrender 80% of their foreign exchange earnings to replenish the CBR reserves after sanctions on the Central Bank of Russia’s gross international reserves (GIR) on February 27 that cut the regulator off from some $300bn held in Europe.

More recently Russian President Vladimir Putin ordered that all “unfriendly countries” should pay for their gas deliveries in rubles, but the Kremlin appeared to walk back from that position on March 30, which analysts say is unworkable on technical grounds related to the SWIFT sanctions.

The Central Bank has also introduced a wide range of strict capital controls, banning companies from sending foreign currency out of the country and prohibiting Russians from buying foreign currency in cash. On the Moscow Exchange, brokers are forced to charge a 12% commission on purchase orders for foreign currencies – a move by Russian regulators to help stave off a run on the currency.

“The ruble is not a fungible currency,” says Maximilian Hess, who is a Central Asia Fellow in the Eurasia Program at the Foreign Policy Research Institute. “These exchange rates are not real.”

The restrictions have significantly reduced demand for the ruble, which is helping to bolster its value. The collapse in imports to Russia has also helped the ruble by significantly boosting the current account surplus, supercharged by very high oil and gas prices. Russia was running a record $120bn current account surplus in 2021 and despite the fall in exports due to sanctions and “self-sanctions” since Russia became so toxic that Western business will not deal even with non-sanctioned Russian entities, the country can anticipate a significant surplus this year as well.

While oil prices have soared on the back of the crisis, Russian oil companies are struggling to find customers willing to buy its oil and what is being sold is being sold at a deep discount: the discount between the benchmark Brent blend and the Russian Urals blend is usually $2 but recently has blown out to $30. This week the Russian pipeline operator Transneft asked Russian producers to slow production, as storage facilities are full to overflowing.