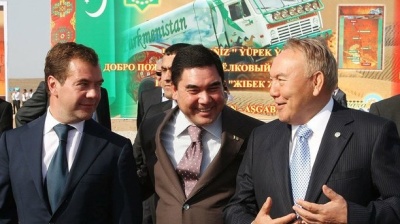 If Turkmenistan’s President Gurbanguly Berdimuhamedov is dead, who was that on the phone? Such a question on July 24 faced all those still choosing to believe rumours that the autocrat has passed away after Uzbekistan’s presidential press service reported that the Turkmen leader spoke by phone with Shavkat Mirziyoyev to congratulate the Uzbek president on his birthday.

The statement marked the first official report on Berdimuhamedov’s activities since July 21, when rumours and unconfirmed reports from Russian news outlets created speculation that the 62-year-old was dead. Speculation persisted despite Turkmen ambassador to Russia, Shadurdy Mereyov, telling Russian TASS news agency on the same day that the reports were "an absolute hoax". Moreover, the Turkmen government's website posted an official note on July 21, attributed to Berdimuhamedov, congratulating Turkmen medical workers and awarding them a workers' day holiday.

However, neither state media nor government officials in Ashgabat commented on the reports of the claimed death for three days. RFE/RL noted that on June 29, during celebrations to mark the Turkmen dictator’s 62nd birthday, imams at mosques across the country prayed for his health, something they have not done in previous years. Also, the news service reported that early on July 24 municipal workers in Ashgabat began cleaning the facades of public buildings—a task usually performed in preparation for a large public event, such as a state funeral or an international conference.

Shortly after the Uzbek report of the phone call broke on July 24, Turkmen state TV showed video footage of Berdimuhamedov at a construction site in the capital, Ashgabat, claiming the footage was recorded on July 24. Despite presenting apparent footage of him at the construction site on that day, the report insisted several times that the president was on vacation until August 15.

Speculation on the state of Berdimuhamedov’s health began as early as July 6 after he failed to appear in public on that day and the previous day, when EU foreign policy chief Federica Mogherini visited Ashgabat.

Turkmenistan's state news agencies are normally full of reports about Berdimuhamedov’s day-to-day activities as part of his personality cult. Such reports have come to a rapid halt this month, adding further fuel to the belief that he might be dead after all.

When neighbouring Uzbekistan’s President Islam Karimov died in 2016, independent reports of him passing away came out much earlier than the government’s official confirmation of his death. If the Turkmen leader has indeed died, then the Turkmen elites will likely keep denying any reports of his death until they can decide on a successor.

The country went through similar machinations when its previous leader, Saparmurat Niyazov, better known as Turkmenbashi, or “Father to the Turkmen,” died in 2006. As bne IntelliNews reported at the time, the news of the death was delayed for weeks while the elite of the country settled on a replacement. While the head of the security services was very nearly selected as the successor, eventually the then relatively unknown Berdimuhamedov got the job. Unconfirmed reports say that he is actually Niyazov’s illegitimate son.