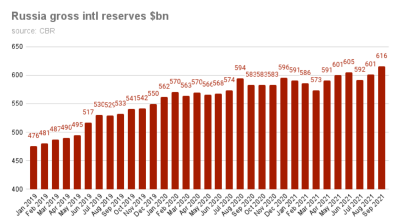 Russia banks its SDR allocation, sending its reserves up to new all-time high of $615bn from a low of $356bn set in 2015 after sanctions were imposed.
By bne IntelliNews September 3, 2021

Russia has banked its allocation of Special Drawing Rights (SDR) issued by the International Monetary Fund (IMF), lifting its international reserves by $20bn to a new all-time high of $615.6bn as of August 27, the Central Bank of Russia (CBR) reported on September 2.

The IMF handed out a total of $650bn in SDR equivalent to all the countries in the world on August 23 as part of a programme to boost the recovery of the global economy following the shock of last year’s coronavirus (COVID-19) pandemic.

Russia has received $18bn worth of SDRs, which are like a special currency used by the IMF and its 190 members. The SDRs can be exchanged between countries for real money, usually dollars, euro or yuan.

Russia’s reserves had already risen to an all-time high of just over $600bn earlier this year as the Central Bank of Russia (CBR), despite all the economic problems since the 2014 oil shock and ruble devaluation, was focused on getting reserves above CBR governor Elvira Nabiullina’s $500bn “comfort level,” with great success, as bne IntelliNews reported in its DATACRUNCH piece comparing Russia’s economy to Ukraine’s.

The previous record was set at the end of July 2008, just before the start of the global financial crisis of that year started in September, of $596.6bn. Reserves fell to a low of $356bn in April 2015 as the Kremlin tapped its cash pile to keep the economy functioning and cushion the blow of a second crisis in 2014 that followed its annexation of Crimea, brought down international sanctions on Russia and then was hit again when oil prices collapsed in 2014, causing yet another devaluation.

Russia’s economy made a very slow recovery after 2014, but strong growth returned in about 2018, allowing the CBR to start actively accumulating reserves again. Now the cash pile is enough to pay off Russia’s entire public and external debt and still have $100bn left over – more than enough to ensure the stability of the ruble and almost two years’ worth of import cover.

Russian President Vladimir Putin has been following a policy of keeping reserves massive, as he sees them as insurance against international sanctions and a strategic weapon in addition to any economic role they play.