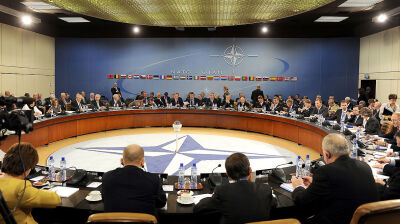 Russia's Ministry of Foreign Affairs has issued a detailed list of demands for talks with the West on limiting Nato's expansion in proposals for a new post Cold War security deal. / wiki
By Ben Aris in Berlin December 13, 2021

​​Following the two-hour December 7 virtual summit between Russian President Vladimir Putin and US President Joe Biden, the Russian Foreign Ministry has followed up and issued a concrete eight-point list of demands on December 10.

Top of the list remains the demand that Nato offer “legal guarantees” that the alliance of 30 western countries will not offer membership to any more countries close to Russia’s border.

Specifically, Russia is calling for the 2008 commitment by Nato to offer Georgia and Ukraine membership of the military alliance in the Budapest Memorandum to be rescinded.

Article 1: the parties should not strengthen their security at the expense of Russia’s security;

Article 2: the parties will use  multilateral consultations and the NATO-Russia Council to address points of conflict;

Article 3: the parties reaffirm that they do not consider each other as adversaries and maintain a dialogue;

Article 4: the parties shall not deploy military forces and weaponry on the territory of any of the other states in Europe in addition to any forces that were deployed as of May 27, 1997;

Article 5: the parties shall not deploy land-based intermediate- and short-range missiles adjacent to the other parties;

Article 6: all member States of the North Atlantic Treaty Organization commit themselves to refrain from any further enlargement of NATO, including the accession of Ukraine as well as other States;

Article 7: the parties that are member States of the North Atlantic Treaty Organization shall not conduct any military activity on the territory of Ukraine as well as other States in the Eastern Europe, in the South Caucasus and in Central Asia; and

Article 8: the agreement shall not be interpreted as affecting the primary responsibility of the Security Council of the United Nations for maintaining international peace and security.

Putin has been complaining about the “broken verbal promises” made to Mikhail Gorbachev in the twilight days of the Soviet Union of no Nato expansion since his famous speech at the Munich Security Conference and as bne IntelliNews has argued elsewhere, it is only now that he feels Russia is strong enough to do something about it. The current crisis started this year when Russian Foreign Minister Sergei Lavrov made his “new rules of the game” speech in February.

Several factors have gone into provoking Russia’s new harder line on Ukraine, including the increased military aid flowing into the latter. Turkey has delivered attack drones which the Ukrainian military used for the first time in November. Ukraine also fired the US-made “tank-busting” Javelin missiles for the first time that month. And in the middle of last year Nato upgraded Ukraine to Enhanced Membership candidate, without formally starting the Nato Membership Action Plan (MAP) process that leads to eventual membership.

In October US intelligence sources reported a significant build-up of Russian forces near to Ukraine’s border that could be a prelude to invasion. Analysts say that an actual attack is unlikely, but as in a similar build-up in April, the move has been seen as the Kremlin putting pressure on the White House ahead of the mooted summit that took place on December 7. If this is the case it seems to have been successful, as Biden has since frozen a $200mn military aid package to Ukraine and organised talks between Russia and four leading Nato members in the days following the summit.

Specifically, Russia’s foreign ministry laid out what it wants in a memo released on December 10:

“We insist on the development – in a specific period of time and on the basis of the principle of equal and indivisible security – serious long-term legal guarantees, excluding any further Nato advance to the east and the deployment of threatening weapons systems [on] the Western borders of Russia.

In the fundamental interests of European security, it is necessary to formally disavow the decision of the 2008 Nato Bucharest summit that "Ukraine and Georgia will become Nato members" as contrary to the commitment of the leaders of all OSCE participating States – "not to strengthen their security at the expense of the security of others."

We insist on the legal consolidation of the agreement on the non-deployment by the United States and other Nato countries of strike weapons systems that pose a threat to the Russian Federation on the territory of neighbouring countries, both members and not members of the North Atlantic Alliance.

We also insist on receiving a concrete Nato response to our earlier proposals to reduce tensions in Europe, including, in particular:

- withdrawal of areas of operational exercises at an agreed distance from the Russia-Nato contact line;

- co-ordination of the maximum distance of approach of warships and aircraft to prevent dangerous military activities, primarily in the Baltic and Black Sea regions;

- resumption of a regular dialogue between the defence ministries along the Russia-US and Russia-Nato lines.

We call on Washington to join the unilateral Russian moratorium on the deployment of ground-based INF in Europe, agree and introduce the necessary measures to verify the fulfilment of mutual obligations.

Nato and the US have been reluctant to start talks on limiting Nato’s role in Europe and Nato Secretary-General Jens Stoltenberg ruled out Russia’s insistence on having a veto over who could join. “Who can join Nato will be determined by its 30 members,” Stoltenberg said over the weekend.

Halting the bloc's eastward expansion was in the West's "fundamental" interests, the Russian Foreign Ministry said.

The document ended with a call for the start of serious negotiations that also included the Organization for Security and Co-operation in Europe (OSCE) as a party to the talks and promised to follow up with even more specific proposals. Russia has already proposed that the West sign up to a new pan-European security deal that included a fair specific framework proposal released by the Russian Foreign Ministry in 2009 that was rejected out of hand by the EU at the time.

In the past few weeks Russia moved around 100,000 troops to Ukraine's border. Putin did not say whether Moscow planned to go on the attack but insisted the country has a right to defend its security.

By supporting Ukraine and Georgia's aspirations, Nato is violating the basic principle of all OSCE participating states to "not strengthen their security at the expense of the security" of other states, Moscow said.

Western politicians have argued that Nato is a purely defensive arrangement and so Nato membership in no way impinges on Russia’s security. Moscow has countered that Nato is simply a front for US geopolitical interests, backed by its massive military power, and as one of the most bellicose countries in the world Ukraine’s membership in Nato does encroach on Russia’s security and so Moscow should have a veto over its membership. The resulting debate has been impassioned and lively, but is unlikely to be resolved easily. However, Putin has moved up his armies to the border in order to successfully force the debate onto the international agenda.

Moscow also said it wanted to receive a "concrete" reaction from Nato regarding a number of earlier proposals, including a demand to move military exercises away from the "contact line" between Nato and Russian forces.

It added that "regular dialogue" between defence officials of Russia, the United States and Nato should resume. One of the concessions that Putin made in the summit was to nix all the restrictions on US diplomats and the functioning of the embassy, especially the ban on Russians nationals working for the US embassy in Moscow that do most of the day-to-day work.

The US has abandoned the Obama-era policy of minimum military aid to Ukraine since US president Donald Trump took over and helps train Ukrainian forces as well as committing more than $2.5bn to bolster a military that crumpled in the face of the Russian assault back in 2014.