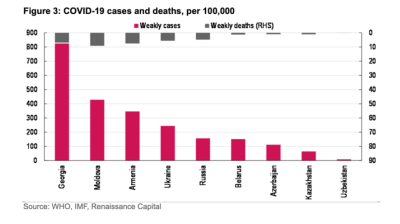 Russia's coronavirus infection rate topped 34,000 new cases a day and the death rate 1,000 per day – both record highs. In an effort to slow the rates the government has given the population a week off and encouraged them to stay home.
By bne IntelliNews October 21, 2021

​​The number of coronavirus (COVID-19) cases in Russia has hit a record high of more than 34,000 new cases per day and the country’s death toll has surpassed 1,000 per day, one of the world’s highest death tolls in absolute terms. The government has decided to try to create a firebreak in the surging infection rate by ordering a “non-work” week from October 30 to November 7, Russian President Vladimir Putin announced on October 20.

The government task force reported 1,028 coronavirus deaths in 24 hours on October 20, the highest number since the start of the pandemic. The government has also recently admitted that it has lost the information campaign and failed to convince the population to get vaccinated despite there now being a plentiful supply.

The latest death toll brings the official absolute total to 226,353, which is by far the highest in Europe, while the unofficial “excess deaths” count is at least three times higher. About 45mn Russians, or 32% of the country’s nearly 146mn people, are fully vaccinated.

Putin gave his blessing to a week of no work starting on October 30, when four of seven proposed days are already bank holidays. He added in the worst regions the non-working period could start as early as Saturday and extend beyond November 7.

Putin strongly urged Russians to get vaccinated, saying “it’s a matter of your life and health and the health of your dear ones… There are only two ways to get over this period – to get sick or to receive a vaccine. It’s better to get the vaccine, why wait for the illness and its grave consequences? Please be responsible and take the necessary measures to protect yourself, your health and your close ones.”

Moscow has already reacted and re-imposed some of the restrictions such as the need to have proof of vaccination to visit bars and restaurants. Fines for not wearing masks on public transport are also being enforced against more vigorously.

However, the government is stopping short of imposing a full lockdown, afraid of the economic damage that would do. The Kremlin ordered a full lockdown last April during the first wave of the pandemic, but did not impose one during the second and third waves that autumn.

“We would expect the potential non-working week to have a limited economic impact, although the recovery in Russia’s service industries would likely slow if QR codes are introduced and vaccinations continue their slow pace (47mn people, or one-third or Russia’s population, have been fully vaccinated),” Sova Capital said in a note. “A hard lockdown on a countrywide level (such a lockdown in Moscow is currently being discussed) is a significant risk that could have a meaningful impact on business activity and slow CBR’s rate-hiking cycle.”

“Our task today is to protect life and health of our citizens and minimise the consequences of the dangerous infection,” Putin said in a video call with top officials as cited by AP. “To achieve that, it’s necessary to first of all slow the pace of contagion and mobilise additional reserves of the healthcare system, which is currently working under a high strain.”

The government has toyed with introducing mandatory vaccination, which would be very unpopular. However, Moscow Mayor Sergey Sobyanin earlier this year did order mandatory vaccination of 60% of workers in the service sector, which caused a surge in the number of Muscovites getting the shots, lifting the share of those vaccinated from 13%, where it had been stuck for months, to round 20% in a matter of weeks. But once again, the momentum was lost and the vast majority of the population remained extremely reluctant to take the jab, due to widespread distrust of the government.

Deputy Prime Minister for social issues Tatyana Golikova, who leads the government coronavirus (COVID-19) task force, said the same day that the non-working week will imply restrictions on access to restaurants, cafes, theatres, cinemas, gyms and other facilities, adding that authorities in each region are in charge of these measures, AP reported.

The Cabinet also announced that it would issue compensation to companies to assuage the economic shock of the loss of work, including one-time payments equivalent to a minimum monthly pay per worker and low-interest credits.

Many of Russia’s 85 regions have already started to take measures as their public health resources are threatened with being overwhelmed once more. Attendance at large public events and access to theatres has already been curtailed in most regions. Other regions have also gone beyond the federal government and made vaccinations compulsory for certain public servants and people over 60, AP reports.

Golikova and Chief Public Health Officer Anna Popova said that QR codes alone are not enough to reduce the spread of the Delta strain, and the non-working day initiative was their proposal.

St. Petersburg announced on October 19 that it would require QR codes for museums, exhibitions and fitness centres starting from November 1 and for cafes and restaurants starting from December 1.

Sobyanin has been one of the most active and aggressive in fighting the epidemic and announced on October 19 that companies would be required to move 30% of their employees online, as well as raise the mandatory vaccination rate for businesses in the service industry to 80% vs. 60%.

Sobyanin also announced that the elderly and those suffering from chronic diseases should self-isolate. However, Forbes' sources reported that the mayor’s office is considering locking down almost all public spaces (including restaurants and shopping malls) for an entire week regardless of QR codes.

“Over the past weeks, Russia’s regions have actively introduced restrictions and have been trying to incentivize people to strictly abide by the current rules via fines (e.g. the fine for riding without a mask in the Moscow Metro is RUB5,000 [$71]),” Sova Capital said. “Given that the proposed non-working week coincides with the November holidays (4-7 November), only three working days (1-3 November) would be impacted by the decision. Moreover, as was the case in May (the May holidays were extended to 1-10 May), another non-working period is unlikely to have a strong impact on the industrial sector, although it could restrain demand for services and keep activity in these sectors subdued in 4Q21.”

Many other countries are doing worse

The fourth wave of the pandemic in Russia is bad but it is worse elsewhere. As bne IntelliNews reported the Russian epidemic spreads quickly to the other Commonwealth of Independent States (CIS) thanks to the presence of a large migratory workforce and the Russian surge threatens the whole region.

Renaissance Capital released a set of charts that compares the other countries of the CIS with Russia and the results are dramatic. The situation in Georgia is by far the worst, where infections per 100,000 population are over 8%, with about 80 deaths per 100,000 a day – twice the rate in Russia. That is most due to the fact that less than a quarter of the population is fully vaccinated and the inoculation programme is going very slowly.

All of Moldova, Armenia and Ukraine are also experiencing faster infection rates than Russia at the moment on a per 100,000 infection basis. The first region in Ukraine went into the “red zone” earlier this week, which triggers restrictions, but another four regions were designated red in the last day and Kyiv is expected to be classed red as well before the end of the week. Ukraine is also experiencing record death rates.

And despite its low penetration of vaccinations, the share of vaccinated is higher in Russia than any other country in the group other than Azerbaijan and Kazakhstan. Uzbekistan has a slightly higher share of people vaccinated with one dose, as it has recently started to rapidly roll out its programme. 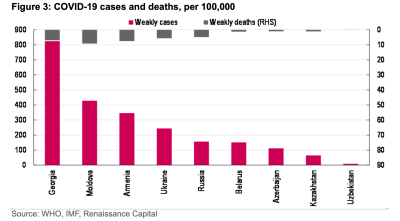 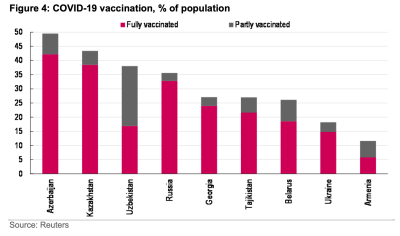