Russia's car and LCV sales declined again in August by 1.3% 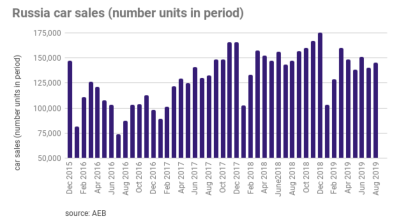 The rate of decline continued to moderate from previous months, which VTB Capital (VTBC) partly attributes to government support for the industry increasing from July. The market could end up flat to slightly positive, depending on how efficient the government support is in stimulating demand in the remaining months of the year, VTBC said in a note.

“We also highlight the strong sales of the Ford Transit, which Sollers has consolidated from July, over the past couple of months,” VTBC said.

Ford Sollers, a joint venture of car major Ford and car assembler Sollers, said it would stop the production of Ford-branded cars in Russia and downsize its staff on March 27. Ford will also stop importing its vehicles to Russia. Sollers took over the joint venture and has been restructuring its business since then.

The car market has been struggling to recover this year. It put in some growth in March after several months of decline, but the recovery has stalled and sales have failed to gather any momentum.

Russia’s AvtoVAZ, with its Lada brand, remained the market leader with a 21% market share in both August and 8mo19. The company continues to outperform the market, growing 5% y/y in August and 3% y/y in 8mo19. The AvtoVAZ/Renault/Nissan/Mitsubishi Group controlled over 36% of the Russian car and LCV market in January-August.

The crisis in the car market has been a boon for Avtovaz which has seen customers flock back to the Russian carmaker after abandoning it in the boom years for foreign brands. The company made its first profit in a decade last year and is trying to consolidate its position with new models.

Sollers' UAZ brand saw its sales declining 3% y/y in both August and YTD.

“We continue to believe that Sollers' ability to increase its UAZ sales will be fairly limited until the company launches a new model in late 2020,” VTBC said.

“We forecast sales of about 6,000 units of the Transit in 2H19, but the recent trends, were they to be sustained, point to potential upside risks to our projections,” VTBC said.

Among other Russian producers, GAZ’s LCV sales were up 6% y/y in August, but still down 2% y/y in January-August.

The growth “will help to claw back some of the output lost” during the pandemic-triggered downturn “but will have to be sustained for a longer period for a full recovery to be secured”, says IHS Markit.

Moscow’s Watcom shopping index has recovered almost all of the ground lost during the lockdown in spring as Russian consumers have returned to the top malls in the capital.