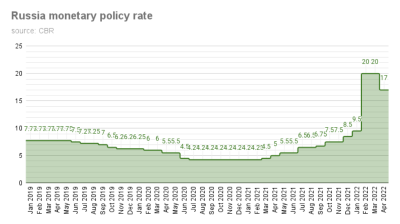 The Central Bank of Russia (CBR) made a surprise key interest rate cut from 20% to 17% on April 8, although the policy board meeting was not scheduled until April 29, as the regulator soft-landed the Russian ruble to the levels at which it traded before the military invasion of Ukraine.

The ruble is trading at pre-invasion levels, which is of extreme importance, as the ruble to the US dollar remains the most closely watched economic indicator by ordinary Russians at home. On the outside, a stable ruble rate helps project invincibility amid Western sanctions.

As closely followed by bne IntelliNews, as the Russian financial system was shocked by the post-invasion fall-out the CBR made an emergency rate hike to 20% and President Vladimir Putin reportedly had to personally keep CBR Governor Elvira Nabiullina from resigning.

Nabiullina was re-appointed for her third five-year term, maintained the rate at 20% and introduced strict capital controls, limitations of capital outflows, and mandatory sales of 80% forex revenues for commodity exporters.

This helped soft-land the ruble exchange rate from over RUB140 to the US dollar to below RUB75 as of April 7, back at the pre-invasion levels. Inflation on the reporting week also showed signs of slowing down, with weekly inflation going below 1% week on week for the first time since the invasion.

Indeed, the CBR attributed the surprise cut in the key interest rate to financial stability risks that “stopped rising” due to the capital control measures adopted.

“Annual inflation will continue to rise due to base effects, but the latest weekly data indicates a significant slowdown in the current rate of price growth, also due to the exchange rate movements of the ruble. The monetary tightening that has occurred is partly offset by the lending support programmes of the government and the Bank of Russia, but will generally continue to limit pro-inflationary risks,” the CBR wrote in the press release.

Notably, the CBR allowed for possible further cutting of the key interest rate, with the next policy meeting now scheduled for April 29.

The CBR's "signal suggests above all that, based on the information available to the regulator, it does not expect a significant surge of volatility in the financial market soon – neither because of a possible "technical" default," Otkritie Bank commented on April 8, referring to the Finance Ministry's decision to opt for confrontation amid sanctioned forex/gold reserves and pay sovereign coupons in rubles.

Nor does the CBR sees a high risk of a significant decline in export earnings and growth in import payments relative to the situation in March, analysts at the sanctioned state-controlled Otkritie believe, expecting the central bank to cut the key rate further to 14-15% at the upcoming policy meetings.

This is not the first time that the Russian ruble rate has been managed by the CBR in a way that seems to deny the fundamentals and external environment. In 2020 ruble withstood the collapse of oil prices after Russia withdrew from the OPEC+ oil output cut deal. Before that, Nabiullina allowed the ruble to float freely as part of her response to the 2014 oil shock, when oil prices collapsed the last time.

After the unprecedented barrage of sanctions for the military invasion of Ukraine that has cut Russia off from the global financial system, some analysts have argued that the ruble strengthening is largely artificial and is only due to strict currency controls put in place by the Finance Ministry and the CBR.

"The ruble is not a fungible currency," said Maximilian Hess, who is a Central Asia Fellow in the Eurasia Programme at the Foreign Policy Research Institute. "These exchange rates are not real."

Central bankers surveyed by Politico also believe that the common assertion that the ruble's strength shows that Western sanctions are failing is wrong. "You can break your windows. You can turn on the heating and then you can pretend that it's summer outside," Latvia's central bank chief, Mārtiņš Kazāks said. "The exchange rate is an imaginary number."

However, Bloomberg argued on April 7 that “despite an incredibly wide-ranging package of sanctions on the Russian government and its oligarchs, and an exodus of foreign businesses, the actions are largely toothless if foreigners keep guzzling Russian oil and natural gas – supporting the ruble by stocking [Russia’s President Vladimir] Putin’s coffers”.

Domestic analysts surveyed by The Bell also attributed the soft-landing ruble to the package of measures adopted by Nabiullina, but agree that the “currency market at the moment practically doesn’t exist” and that demand for foreign currency in Russia at the moment is non-existent.

At the same time, as covered by bne IntelliNews, Russian energy exports alone are expected to cash in over $320bn of exports revenues this year, and the CBR will have to neutralise this FX pile eventually and relax the currency controls. A strong ruble will also sabotage the federal budget that is drafted at RUB72 to US dollar for 2022.

Indeed, shortly after the key interest rate announcement the CBR also started softening currency controls. On Friday April 8 the regulator cancelled a minimum 12% commission for the buying and selling of euros and dollars, and cancelled the mandatory currency exchange spread ceiling that was set at RUB2 deviation from the official CBR exchange rate. The CBR also permitted the banks to sell foreign currency to retail clients and to withdraw euros from retail deposits (capped at $10,000).

The analysts surveyed by Kommersant daily believe that ruble will not be allowed to strengthen below RUB72 to US dollar budgeted for the federal budget. The CBR will now likely allow the ruble to find its equilibrium within a RUB80 to RUB100 to the US dollar range, they believe.