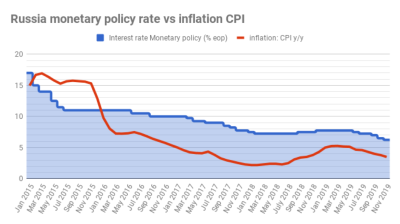 The board of the Central Bank of Russia (CBR) resolved to cut the key interest rate by 25bp to 6.25% at the policy meeting of December 13, making the fifth cut of the rate this year of total 150bp.

The CBR was largely expected to cut the rate at the last meeting of 2019, attributed to inflation already trending below the 4% target of the regulator. The CBR has published a new inflation target of 2.9-3.2% commenting on the December cut, but still expects the consumer price growth in the range of 3.5-4% by the end of 2020.

At the same time the CBR not only opted not to repeat the bold cut of 50bp seen in October, but sent less dovish signals on the monetary easing than previously published.

In the statement accompanying the rate cut decision, the CBR said it would consider  the necessity of further cuts in 1H20, while previously it did not give any timeline and promised to cut rate at one of the "upcoming meetings".

The analysts surveyed by Reuters see the wording as indicating that currently CBR sees no more room for cutting the key interest rate, and is likely to maintain the inflation-neutral range for the key rate at 6-7% in the short-term.

"The statement accompanying the Russian central bank’s decision today... at which the policy rate was lowered from 6.50% to 6.25%, suggests that policymakers see scope for one more cut in the current cycle," Capital Economics commented on December 13.

"That being said, there was a note of caution in the statement, indicating that the next cut may be the last in the current cycle," the analysts believe.