Russia’s CBR predicts 7% contraction of the economy in 3Q22 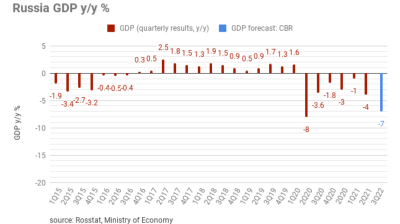 The CBR released its forecast for growth in 3Q22 and predicts a 7% contraction as the low point in the current shock. It also says the recovery will take longer than in previous crises. / bne IntelliNews
By bne IntelliNews August 2, 2022

The Central Bank of Russia (CBR) for the first time gave a forecast of a fall in Russian GDP in the third quarter – according to the regulator, the economy may fall by 7%, and inflation will continue to slow down.

But the Central Bank does not expect new serious sanctions, nor a global recession. All this together means that, other things being equal, the reduction of the key rate should continue, the bank said in a report on August 1.

In the third quarter the Russian economy should accelerate its fall to 7% from 4% in the second quarter and 4.9% in June, according to a forecast in the CBR's report on monetary policy. At the same time, inflation will slow by the end of September, the CBR anticipates 14.6% in annual terms compared with the current 15.3%.

The report is titled "A longer, but less painful economic recession" and this is fully consistent with Governor Elvira Nabiullina's speech after the last rate cut by the CBR on July 22.

The CBR is also predicting a contraction for the full year of 5%, slightly better than the professional economists’ forecast of -6%, according to the regulator’s recent macroeconomic survey. Most independent economists and the International Monetary Fund (IMF) have revised their forecasts in the last month to predict a much milder contraction than was expected at the start of the war in February.

In the baseline scenario, the CBR assumes that the most negative forecasts will not come true. There will be no new serious sanctions against Russia. “Geopolitical tension in the world intensified in February. The baseline scenario does not imply a significant change in geopolitical conditions until the end of the forecast horizon,” the CBR said, as cited by The Bell.

The regulator also does not expect a global recession. “The base case assumes that a balanced monetary policy will allow the largest economies to avoid a major recession. But the risks of this scenario are skewed towards weaker growth and lower output levels in the coming quarters.”

Nevertheless, the CBR included both probabilities in the list of potential risks for the baseline forecast, indicating that both could lead to a weakening of the ruble.

The improvement in the CBR’s forecast reflects the objective picture in the Russian economy that has developed in the first half of the year and the beginning of the third quarter – while it is experiencing sanctions pressure and the country’s international isolation is better than expected.

“The drama of the economic downturn in 2022, in terms of the scale of the fall and the extended trajectory of recovery, so far looks more like the crisis of 2015 (with a fall in GDP by 2%) than the deep failure of 2009 (almost 8%),” said Renaissance Capital's chief economist at Russia and the CIS, Sofia Donets.

The short-term conclusions of the experts boiled down to the fact that the third quarter will be the peak of the decline in GDP (this also follows from the forecast of the Central Bank). But on a “longer trajectory of recession,” new tests await the economy, the most obvious is the entry into full force of EU sanctions at the end of the year, banning the import of Russian oil. This could trigger a second wave of GDP contraction. The EU plans to cut two thirds of crude imports by December 5 and refined products by February 5.

The combination of an accelerating economic downturn with slowing inflation makes further rate cuts almost inevitable. The next meeting of the board of directors on the rate will be held on September 16. The latest Reuters poll of analysts at the end of last week suggests that by the end of the year the rate will be reduced by another 1 percentage point from 8% to 7%.