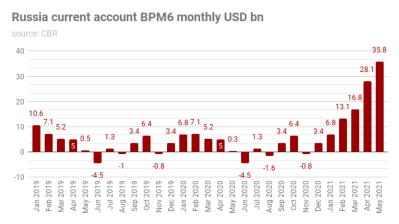 With oil prices above $75, tourists stuck at home and imports growing slowly, Russia Inc. is making a tidy profit that is sending up the current account surplus ahead of expectations and filling the state's coffers.
By bne IntelliNews July 1, 2021

Russia’s current account surplus extended gains in May to reach $35.8bn, an increase of a quarter compared to January-May 2020 and up on the $28.1bn posted in April, according to the Central Bank of Russia (CBR). The surplus is feeding international reserves, which hit an all-time high of $605bn as of the start of June.

The growth in the trade surplus was due to a more active recovery in the volume of exports of goods compared to imports, the CBR said. With oil price above $75 per barrel the trade balance is running significantly ahead of forecasts and adding earnings to Russia’s foreign exchange reserves, which are over $600bn for the first time ever now. The reduction in the negative balance of services as a result of persistent restrictions on international tourist travel also played a significant role in strengthening the current account.

The positive balance of financial transactions in the private sector in January-May 2021 was at a lower level than a year earlier and amounted to $24.6bn. In contrast to the trend of previous years, the contribution of the banking sector to the dynamics of the indicator was relatively small, the CBR said in a regular update. Operations of other sectors, aimed both at reducing liabilities to non-residents and at increasing investments in financial assets abroad, became decisive.

Prices of bread and flour products in Kosovo jump by up to 50%
11 hours ago
Bank lending in Georgia up 12.9% y/y at end-September
11 hours ago
National Bank of Ukraine leaves key policy rate unchanged at 8.5%
13 hours ago
Kazakh industrial output up 2.7% in first nine months
4 days ago
Slovak unemployment rate at 7.09% in September
4 days ago