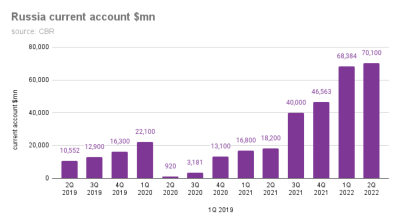 The current account surplus of Russia’s balance of payments hit a new all-time high of $166bn in the first seven months of this year – triple the level of the same period a year ago that was already a record, according to the Central Bank of Russia’s (CBR's) preliminary estimate released on August 9. (chart)

The current account dynamics was determined by a widening of the surplus in the balance on goods and services as a result of “significant growth in the value of exports of goods and a decline in the value of imports,” CBR said in a press release.

The total deficit of other components of the current account remained at the level of the previous year, the regulator added, and the financial account surplus of the balance of payments was formed due to both a decrease in liabilities to non-residents and growth in foreign financial assets.

Russia has been earning outsized profits thanks to a surge in the price of oil and gas. While gas revenues have fallen off more recently after Gazprom reduced flows of gas to Europe by 60% in June, oil revenues continue to be strong after Russia successfully switched deliveries from Europe to China and India.

In January, 54.5% of Russian oil exports (and thus 80% of the country’s oil and gas revenues) went to the European Union. By June, according to International Energy Agency figures, Russian oil exports to Europe were down a third amid Western sanctions and the announcement of a phased oil embargo.

At the height of the uncertainty in March, it looked like Russia’s “pivot to the East” might not work. Major Chinese companies refused to take Russian oil and India made to buy from the Middle East if sanctions wiped out Russian deliveries. But even by April it was clear self-interest had won out: tempted by discounts of up to 30%, China and India were happy to increase orders of Russian oil. According to Norwegian industry consultants Rystad Energy, sales of Russian crude oil to Asia almost completely compensate for European losses. 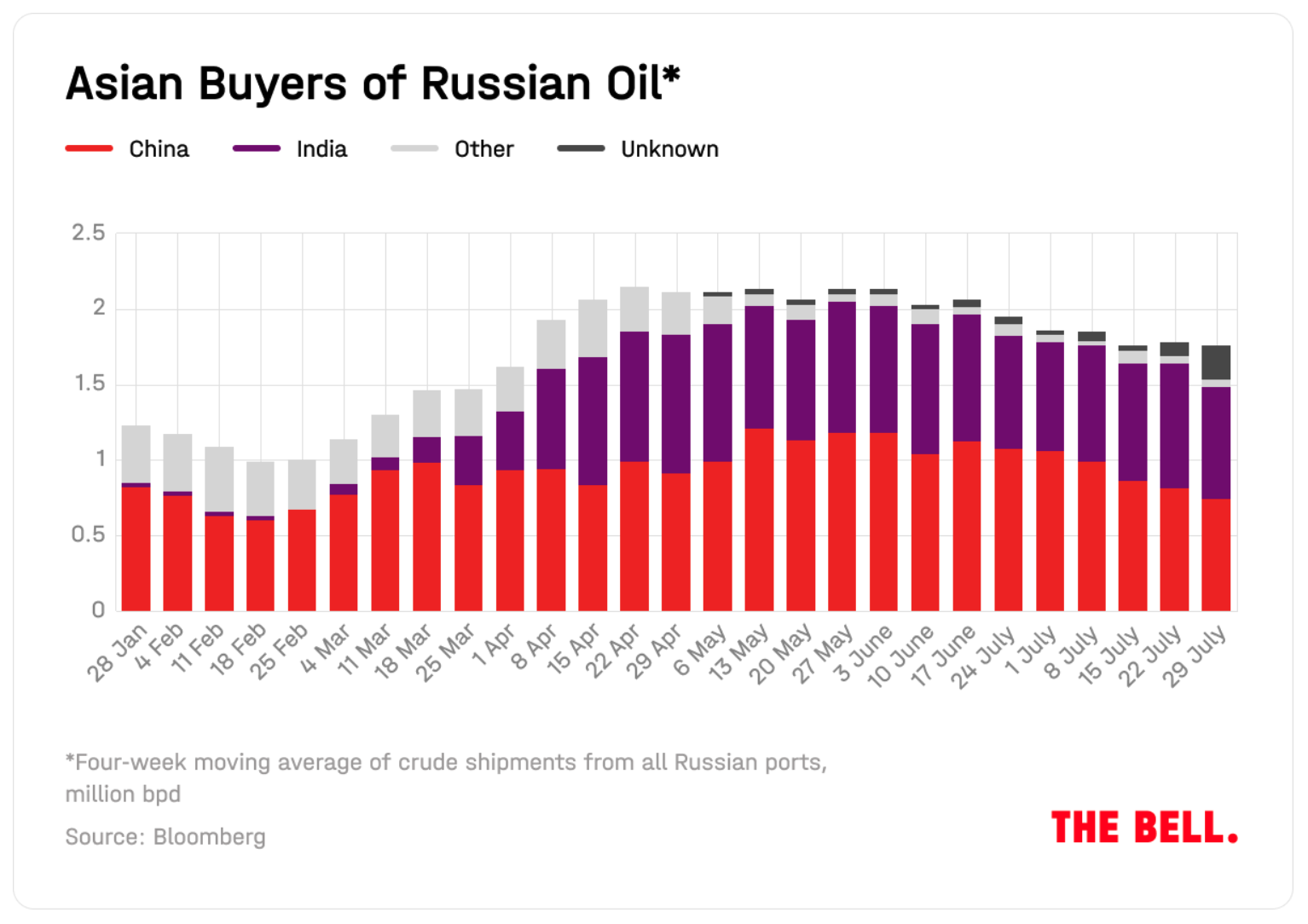 At several times during the war Russian deliveries to China were greater (for example, in May, they reached an average of 1.2mn barrels a day). And these are only maritime deliveries; Russia sells roughly the same amount to China (880,000 barrels per day in June) via three pipelines: one Kazakh and two Russian. These have operated at full capacity all summer.

Even so, Russia’s oil trade with China is barely increasing. According to Chinese customs statistics, in the first half of 2022, Russian crude oil exports to China were up just 4%, The Bell reports.

Russia’s industrial output decline slows to only 0.1% in August
2 days ago
Poll shows Putin's popularity took hit in September but remained as high as 77%
2 days ago
Russia on track to have a record-smashing grain harvest
4 days ago
Bosnia posts annual CPI inflation of 16.8% y/y in August
5 days ago
IMF sees Romania’s economy growing by 4.8% in 2022, analysts are even more bullish
5 days ago