Russia’s EconMin seen as overly optimistic with another GDP upgrade 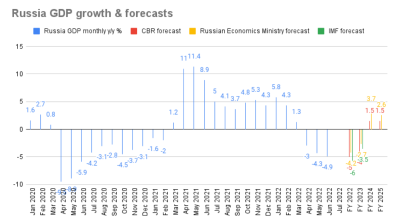 Russia economy is expected to contract this year, but the forecasts are becoming increasingly mild from a fall of 8-15% at the start of the war to 5-6% more recently. MinEcon has just released the mildest yet forecast of minus 4.2% / bne IntelliNews
By bne IntelliNews August 18, 2022

Russia’s Ministry of Economic Development is preparing a revised macroeconomic forecast for 2022, revising the GDP decline to 4.2% from the previously forecast 7.8% contraction, RBC business portal and Kommersant daily reported citing an unpublished draft of the document.

The 2022 outlook of the ministry is in line with the most optimistic baseline scenario of the recently released strategy and outlook for the near term by the Central Bank of Russia (CBR).

However, the growing optimism of the EconMin is seen as being too much too soon by the analysts, as it is too early to tell to what extent and how exactly the Russian economy is affected by the Western sanctions for the military invasion of Ukraine.

“Even if GDP growth in 1H22 exceeds conservative expectations, we would not see this as a directly positive event, as we are still concerned about the structure of economic growth and next year’s risks,” BCS Global Markets commented on August 17.

As followed by bne IntelliNews, GDP forecasts for Russia hit by Western sanctions following the military invasion of Ukraine have recently improved across the board. The International Monetary Fund (IMF) said Russia’s economy is doing better than expected, upgrading its forecast for the contraction anticipated this year to -6% from -8%.

However, despite the optimistic outlook revisions, as compared to May’s -4.3%, in June the GDP decline slightly accelerated. For 2Q22 overall GDP contracted by 4%.

BCS GM analysts previously warned that the 2Q22 macro data "still reflects the fragility of the current economic situation, and for now, cannot be viewed as an indication of low damage to the economy.”

BCS GM also warned that a possible global recession is a serious additional risk factor for Russia, echoing a recent report by the Central Bank of Russia.

The EconMin, in the meantime, has reportedly improved the outlook across the board, with annual inflation in 2022 now seen at 13.4% (17.5% previously), and real disposable income contracting by 2.8% (6.8% in previous outlook).

Still, the ministry is admitting that as the sanctions pressure continues to intensify, the recession in Russia risks to be more prolonged – the EconMin reportedly revised the 2023 contraction from 0.7% to 2.7%. But the ministry expects a fast bounce-back, seeing the economy growing by 3.7% and 2.6% in 2024 and 2025 respectively.

Russia on track to have a record-smashing grain harvest
13 hours ago
Bosnia posts annual CPI inflation of 16.8% y/y in August
22 hours ago
IMF sees Romania’s economy growing by 4.8% in 2022, analysts are even more bullish
1 day ago
Moldova’s manufacturing activity plunges to levels not seen since lockdown
5 days ago
Analysts wrong again as 'unorthodox' Turkey cuts rates another 100 bp
6 days ago