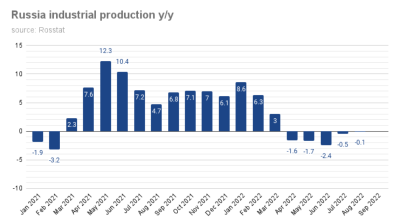 The shock of sanctions is wearing off as the change in Russia's industrial production for August was almost flat. However, that doesn't mean the economy is recovering. Currently it is merely moving sideways. / bne IntelliNews
By bne IntelliNews September 30, 2022

The contraction in August was better than the still mild 0.5% y/y contraction in July. (chart) In month-on-month terms industry production grew by 1.2% in seasonally adjusted terms in August, Capital Economics reports.

Russia’s economy has been doing much better than expected in the face of the massive sanctions package imposed by the West following its invasion of Ukraine in February. Whereas most economists were predicting a GDP contraction this year of between 8% and 15% shortly after the war began, the estimates now predict a contraction of between 3% and 6%, depending on who you ask.

But the pain to the economy of sanctions is very unevenly spread and some sectors, automotive in particular, have been far worse affected than others.

“At the sector level the picture was one of more or less stagnation. Mining output growth rose from 0.9% y/y to 1.0% y/y and the downturn in manufacturing eased from -1.1% y/y to -0.8% y/y," Liam Peach, an emerging market economist with Capital Economics, said in a note.

Mining and energy remain the sectors that are holding up the rest of the economy. Oil and gas output was more or less flat in August but remains more than 3% below its February level. Most of the strength in mining was due to a rise in metal ore mining, which had contracted each month since November.

“In manufacturing, there are clear signs that the downturn is no longer deepening in many sectors, such as metals and chemicals. But at the same time, very few sectors are recovering. Motor vehicles production barely rose at all m/m and remains 50% below end-2021 levels,” Peach said.

Consumers have also been affected by a number of factors like high inflation and especially high food prices. The war has also introduced some uncertainty, which has led many consumers to hold off making big ticket purchases and depressed demand.

The contraction in retail sales deepened marginally from -8.7% y/y in July to -8.8% y/y in August, reports Capital Economics. “In seasonally adjusted terms, we estimate that sales did not rise at all m/m as a fall in food sales was offset by a pick-up in non-food sales. The big picture is that retail sales have stagnated since the initial 11% m/m slump in April, despite the sharp decline in inflation and the mild recovery in bank lending. This is likely to remain the case for many months,” said Peach.

The results tally with the government’s assessment that the worst shocks from sanctions have passed. Russian President Vladimir Putin gave the most optimistic forecast for this year’s economic performance of any one yet on September 7, saying that there will be no budget deficit this year and that economic contraction will be no more than 2.5%.

"State finances have stabilised, and I would like to note that this year’s budget will have a surplus of up to RUB0.5 trillion, around RUB485bn ($8bn) despite all dismal projections," he said at a plenary session of the Eastern Economic Forum (EEF) on September 7.

Capital Economics concurs with the president’s sentiment, if not with his numbers.

“Overall, the August activity data provide more evidence to suggest that Russia’s downturn has bottomed out and we think the deep 6% quarter-on-quarter contraction in GDP in Q2 will be followed by a shallower fall in Q3 (less than 1% q/q). We recently revised our forecast for the full year decline in GDP from 7% to 3%. But the economy is levelling off rather than recovering and we expect another contraction, of 2%, in 2023, particularly as tighter sanctions on Russia’s energy sector come into force,” said Peach.

2023 will see further GDP deceleration to about 1% in what analysts say is a “soft landing” of the economy.

The index eased growth for a fourth consecutive time in December, confirming expectations for inflation to decline.

The share of non-performing loans in Ukraine reached 37% in December 2022, their highest level since the nationalisation of Privatbank in 2016.