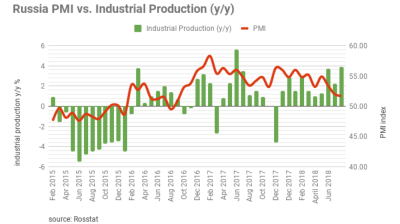 Russia's industrial production dips to 2.6% in October after expanding by 3% in September
By bne IntelliNews November 19, 2019

Russia’s industrial production rose by 2.6% y/y in October, which is down from the 3% y/y growth in the previous month, Rosstat reported on November 18.

Russia’s manufacturing and industrial sector growth is spluttering and unable to gather any momentum, while the service sector is doing much better. October’s result means industrial production over 10M19 was 2.7%.

The deceleration in y/y terms could be attributed to the high base from last year -- production rose 3.7% y/y last October – as well as due to the fact that this October had the same amount of working days as last October, whereas this September had one more working day than last September. As a result, on a seasonally adjusted basis, industrial production rose by 0.3% m/m, compared with a 0.1% m/m decline in September, Alexander Isakov, chief economist at VTB Capital said in a note.

The breakdown shows that manufacturing was the main driver in October, rising by 3.7% y/y, up from 3.2% y/y in September. Growth in mining and quarrying, meanwhile, slowed to 0.9% y/y from 2.5% the month before, as it was negatively affected by lower oil and gas production (down 0.7% y/y in October versus 0.6% y/y growth in September), VTBC reports.

Production of cars declined by 8.2% y/y in October, indicating that the process of recovery in the car market is close to its end. The most recent sales figures suggest that the car sector will end this year flat, against expectations of a recovery at the start of the year.