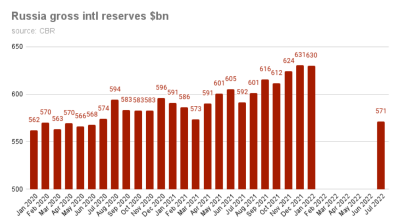 Russia’s gross international reserves (GIR) were up by $3.6bn in a week to $571.2bn as of August 5, the Central Bank of Russia (CBR) reported, at the same time as individuals are buying record amounts of foreign currency.

Russia’s international reserves increased by 0.6% (or $3.6bn) in one week, the central bank reported on August 11. The CBR stopped reporting the monthly reserves figures at the end of January when total GIR stood at $630.2bn. (chart)

Foreign exchange is pouring into the CBR coffers after the current account surplus of Russia's balance of payments hit a new all-time high of $166bn in the first seven months of this year – triple its level in the same period a year earlier that was already a record high. Sanctions intended to reduce Russia’s revenue from energy exports have backfired, and after they sent prices soaring the Kremlin is earning more money than ever. Ironically, the highly effective bans on exports of equipment and technology to Russia have worked against the leaky energy sanctions as they have dramatically reduced imports to Russia that have only bolstered the current account surplus further.

Some $300bn worth of gold and foreign currency CBR reserves were frozen shortly after the invasion of Ukraine in February, but the soaring revenues from oil exports will cover a large share of that money by the end of this year, say economists.

The crisis-scarred population have also been reacting to the sanctions on currency transactions by moving their cash savings out of the traditional dollars and euros into other currencies of the “friendly” countries.

Individual purchases of currency on MOE overtook transactions by bankers for the first time ever in the second half of July, the CBR said in its latest financial market risks review.

Individuals mainly bought foreign currency at banks that could then send the money to accounts overseas.

The outflow of currency has also been visible in the ruble-dollar exchange rate, as the ruble weakened and was trading at RUB60.6 at the time of writing, down from its recent high of almost RUB50 to the dollar. As imports recover, further growth of foreign currency demands can be expected for market players, the central bank said.

The “yuanisation” of the Russian economy continues as a result of the Western sanctions imposed on Russia. The yuan became the third most traded currency in terms of volume of foreign exchange trading on the Moscow Exchange in July and will soon take second place, The Bell reported on August 8, as companies and individuals rush to get out of the dollar and into non-sanctioned currencies.

Banks have been building up large amounts of dollars and euros they can’t spend due to sanctions and have been actively trying to swap them for other currencies.

The government has been doing the same thing, signing trade deals with its partners in local currency and using other non-traditional currencies for international trade. Russia oil exports to India are now being settled in Chinese yuan, Hong Kong dollars and UAE dinars, according to reports.

Ordinary Russians have been moving their savings out of dollars. Balances at retail bank accounts in foreign currency declined in July by $3bn, the CBR reports. Just before the war there was only one Russian bank that offered deposit accounts in yuan; now there are 20, according to The Bell.

Russia’s industrial output decline slows to only 0.1% in August
3 days ago
Poll shows Putin's popularity took hit in September but remained as high as 77%
3 days ago
Russia on track to have a record-smashing grain harvest
5 days ago
Bosnia posts annual CPI inflation of 16.8% y/y in August
5 days ago
IMF sees Romania’s economy growing by 4.8% in 2022, analysts are even more bullish
6 days ago