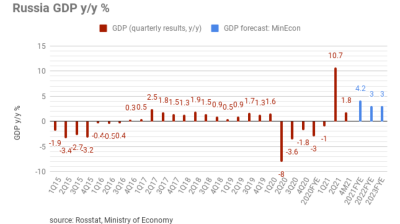 In preparation for the 2022-24 Russian federal budget, the Ministry of Economic Development released new predictions for macroeconomic indicators from 2021-24, BMB Russia reports.

However, inflation is expected to get worse. The Ministry expects the growth in consumer prices to be 5.8% in 2021, the highest in five years. Minister of Economic Development Maxim Reshetnikov attributes this to global inflation, the disruption of value chains and poor Russian harvests.

The ministry’s inflation prediction is still lower than that of the CBR, which forecasts CPI at 5.7-6.2%. The ministry’s predictions are also at odds with a recent OECD report that puts Russia’s economic growth at 2.7% and inflation at 6.1% for 2021.

This is the third version of the forecast by the Ministry this year. “The main thing that served as the basis for revising the forecast is the fact that the Russian economy recovered faster than we had planned,” a representative said. President Putin also recently remarked that Russia has overcome the economic downturn due to the pandemic and that the economy has recovered.

On September 21, the government approved the draft federal budget. The budget assumes a surplus in the next two years and a deficit in 2024. The budget is due to the State Duma by October 1.