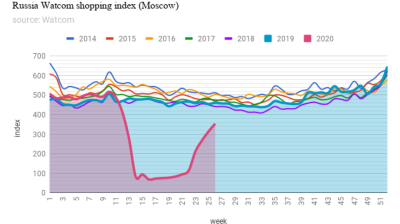 Russia's Watcom Shopping Index has clawed back three quarters of the ground lost to the coronacrisis, but experts warn a second wave could appear in a fortnight following the easing of restrictions for the Victory Day parade and the referendum
By Ben Aris in Berlin July 7, 2020

Russia’s Watcom Shopping Index has recovered three quarters of the ground lost during the coronacrisis, according to the latest data for Week 26 of this year, after restrictions in Russia were eased in June.

The index was doing better than in the last three years for the first two months of this year after real incomes began to rise in the fourth quarter of 2019 for the first time in six years, and was ahead of game up until Week 11 in mid-March of this year.

However, after the coronavirus (COVID-19) epidemic took hold towards the end of March the index began to fall rapidly even before the lockdown was imposed on March 30 in Moscow, and then within a few days in most of Russia’s regional cities.

The index collapsed, with foot traffic in the major malls in Moscow and St Petersburg falling to 70%-80% below their levels a year earlier.

But after the lockdowns began to be eased towards the end of June the index has recovered most of the ground it has lost by the start of July as urban residents in Russia’s two biggest cities go out to shop again and malls reopen for business.

The trajectory remains positive and the index is predicted to continue to recover in the coming weeks, all things being equal.

The big unknown is the possibility of a resurgence of infections caused by the Kremlin’s decision to ease the restrictions ahead of the recent referendum on constitutional changes called by Russian President Vladimir Putin at the start of this year that saw people come out in large numbers to vote in the controversial poll. In addition, the Victory Day parade that was delayed from May was held in June, which also saw large crowds gather in Moscow for the event. Just over a dozen regions refused to hold similar local parades due to public health fears.

Experts say these large public gatherings could result in a surge in infections that will become apparent in about two weeks time and could lead to a re-imposition of restrictions. Moscow Mayor Sergey Sobyanin was against ending the restrictions in June and has been the champion of drastic action to bring the epidemic under control in Russia.

Infection rates in the Russian capital were falling fast in June, although they continued to climb in the regional cities, which are running several weeks behind Moscow. Now experts think all these gains have been lost because of the Kremlin’s impatience; Sobyanin lifted restrictions after a meeting with Putin, who insisted on relaxing the restrictions regime in order to hold the parade and the referendum.

Russia is not alone in seeing a resurgence of the virus as a second wave spreads across the region and in other countries around the world. Poor countries such as Armenia and Ukraine have been desperate to restart their economies, as they can ill afford a protracted lockdown, and have seen infection rates soar as a result. As bne IntelliNews reported, Armenia has chosen not to re-impose restrictions despite having some of the fastest growing infection rates in the world and Ukraine was also discussing renewing restrictions in July after new infection rates hit fresh record highs at the end of June.