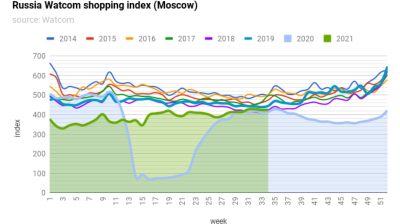 Russia’s Watcom shopping index returned to its pre-COVID levels in August, but inflation expectations by shoppers remain very high and will probably lead to a CBR rate hike next week.
By bne IntelliNews September 6, 2021

However, the results come as the Russian economy is going through a correction after the bounce-back overshoot following 10.3% GDP growth in the second quarter of this year – a record.

After crashing last year when all the stores were simply shut down, retail rebounded in the second quarter of this year to a peak of 35.1% year-on-year growth in April. Since then, the growth in sales has fallen off dramatically as the low base effect, caused by the lockdowns, wears off. In July retail growth was 4.7% y/y, a more normal rate – a result confirmed by the Watcom index that simply measures the volume of foot traffic in Moscow’s leading shopping malls by using 3D technology to count the number of shoppers in real time.

The current correction, which is expected to be mild and simply caused by the size of the swings in the economy in the last year, was also highlighted by the services PMI, which went back into the red in August, according to IHS Markit Russia Manufacturing Purchasing Index (PMI).

Russia’s seasonally adjusted services PMI fell below the 50 no-change mark to 49.3, down heavily from 53.5 in July as the low base effects wear off, Markit reported on September 3. The manufacturing and composite PMIs were also both back underwater.

Retail is being hurt by the high levels of inflation that the Central Bank of Russia (CBR) is struggling to contain, despite reversing almost seven years of easing and introducing a string of rate hikes this year – March (25bp), April (50bp), June (50bp) and July (100bp).

Inflation remains stubbornly high at 6.5% for the last two months and weekly inflation data released on August 30 suggests the next post will increase to 6.7% for August. The pressures come from a weaker-than-expected deflation in fruits and vegetables, as well as from non-food goods, which got a boost from the RUB10,000 payments made to families with school-age children, reports Sova Capital.

Food inflation was running at 7.4% in July, while non-food was 7.5%, although inflation in services was only 3.8% as demand cooled, according to the CBR – a result confirmed by Markit’s poll of business owners.

Consumers’ expectations for inflation remain elevated, with the FOMs monthly survey, commissioned by the CBR, reporting the median expectation for price rise over the next 12 months of 12.5% – more than twice the CBR’s forecast for inflation to fall back to its target 4%. Russians with no savings, for whom food makes up a disproportionately large part of their shopping basket, expect prices to rise even faster, at a whopping 18.3%, FOMs reported this week. That is even higher than the 18% anticipated last week and the 9.9% expectation average last year.

CBR Governor Elvira Nabiullina has been concerned that the shopping public’s expectation for price rises has become “unanchored” from reality and that is having an impact on retail turnover and is itself inflationary.

“CBR is scheduled to meet to discuss the key rate on September 10," said an analyst's note. “This will mark the first time CBR has met since hiking the rate 100bps in July, when CBR's rhetoric was moderately hawkish, assuming additional policy adjustments based on economic conditions. Although CBR officials denied giving a clearer signal vs. July this week, the most recent developments have shown that inflationary pressures arising from supply-demand mismatches have persisted, a problem further amplified by the looser fiscal policy (especially on the social front). As a result, we believe CBR could hike the rate another 50bps to curb the secondary effects of additional social outlays and global supply disruptions.”

Most economists believe that a slowdown this autumn will be mild and that underlying growth remains strong, albeit modest.

“At the start of the autumn, the Russian economy was not only back to [its] pre-crisis level, but already above it. The recently announced pre-elections fiscal stimulus should add momentum to consumer demand growth in the next few months, lifting our initially bullish 2021 GDP growth forecast to 4.5% y/y (from 4.2%),” says Sofya Donets, the economist for Russia and the CIS at Renaissance Capital.

“We expect fiscal policy should remain moderately supportive for growth in the next three years, while remaining within a prudent fiscal rule framework. A flattening recovery and easing supply-side constraints should ease inflation pressure gradually, driving inflation below the 4% target in mid-2022, on our forecasts,” Donets added.  “We believe the Central Bank of Russia is likely to finalise this year’s hiking cycle next Friday (10 September) by increasing the key rate 50 bpts to 7.0%. We, however, highlight a 30% probability of another 25-bpt hike in 4Q21. We see scope for ruble appreciation to RUB70-71/$in 4Q21 amid a revival in capital inflow, although global sentiment remains the primary unknown. We forecast the ruble at RUB72.0/$in 2022.”