Russian car sales down 43% in March 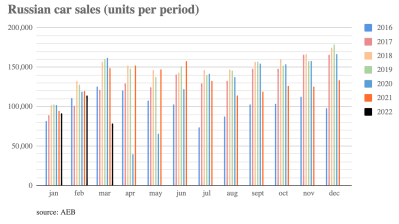 Sales of passenger cars in Russia in March dropped by 43% year on year to 78,900 units, marking a record-high monthly drop and the steepest since 2007. / bne IntelliNews
By bne IntelliNews April 6, 2022

Sales of passenger cars in Russia in March 2022 crashed by 43% year on year to 78,900 units, marking a record-high monthly drop and the steepest since 2007, Autonews.ru reported citing the data from Avtostat. Only April 2020 during the first wave of the coronavirus (COVID-19) pandemic saw lower sales of 54,500 vehicles.

Another report by the Association of European Businesses (AEB) puts the decline in the car and light commercial vehicles (LCVs) sales in March at 63% to 55,129 units. The sales of market leader AvtoVaz and its Lada models dropped by 64% y/y.

The drop in car sales is attributed to a sharp deficit of imported components that led to car assembly being suspended and foreign brands suspending their sales amid Russia’s military invasion of Ukraine. This was also accompanied by a sharp price growth of an average of 35-45% on new cars.

Last week a report by RBC business portal claimed that due to shortages of imported components most Russian car manufacturing has effectively stalled. AvtoVaz will release all of its staff on vacation from April 4 to 24, and after that will switch to a four-day working week. The carmaker is also scrambling to set up an emergency assembly of a Lada model that would be self-sufficient.

Industry sources told RBC that this would be possible for Lada Granta, Lada Largus and Niva Legend models, but with manual transmission only and without ABS, ESP and airbags.

The AvtoVaz-Renault-Nissan-Mitsubishi alliance controlled 35.5% of the car market in Russia at the beginning of 2022. Renault-Nissan is the largest shareholder in AvtoVaz and is considering the transfer of its stake. Billions of euros of equity injections from foreign carmakers allowed AvtoVaz to turn around in 2018.