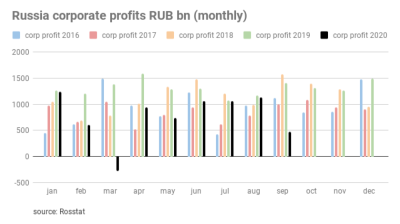 Russian cumulative corporate profits reached RUB6,972.9bn ($91.7bn) in September, still significantly down on the RUB11,689bn ($153.8bn) that companies earned in the same period in 2019, and are at their lowest level in four years.

The economic recovery that started at the end of the summer, based on strong consumption following the end of the lockdown restrictions, clearly faded fast as a second wave of the coronacrisis got under way at the end of September. But analysts say the slow-down had already begun earlier in September and that this will be compounded in November.

Month-on-month corporate profits fell to half their level both the month before from RUB1,132bn in August to RUB470bn in September, and also to a third of their level from September 2019.

The results in November are likely to be much worse, as the Watcom shopping index shows that foot traffic began to drop off in September and continued to fall in November and is currently down by about a quarter year on year.

The slow-down in profits is at its lowest level in four years both in cumulative and m/m terms, whereas in the summer months profits were at least on a par with 2016 and 2017, the first two years after the oil shock from 2014 had finally worn off, even if they were less than 2018 and 2019, the latter being a particularly strong year as the economy had almost returned to normal.

Russian companies face another difficult six months thanks to the second wave of coronavirus (COVID-19) infections and the miasma that lies over the global economy, but as the pandemic is expected to recede in the second half of 2021 the economy is anticipated to pick up after that.

Question? Get in touch with sales@intellinews.com