Russian corporate profits continue to recover, and caught up with 2019 earnings in July 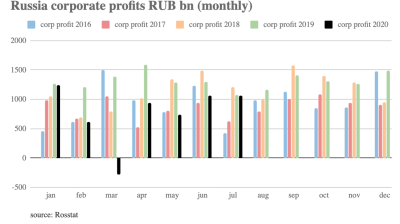 On a monthly basis Russian companies earned RUB1,061bn in July, which was only marginally down from the RUB1,070bn they earned in 2019 and well ahead of the circa RUB422bn and RUB624bn they earned in July 2016 and 2017 at the tail-end of Russia’s last crisis.
By bne IntelliNews September 29, 2020

Russian corporate profits are maintaining their recovery and on a cumulative basis continue to claw back ground lost in the second quarter during the worst of the coronacrisis. Monthly corporate profits were back at the same level they were in July 2019.

Cumulatively Russian companies collectively posted RUB5,370bn ($68bn) of profit in July, the latest data available, which is on a par with profits in 2016 and 2017, but still well behind the RUB9,111bn they earned in 2019.

However, there is a definite acceleration in the return to profitability. On a monthly basis Russian companies earned RUB1,061bn in July, which was only marginally down from the RUB1,070bn they earned in 2019 and well ahead of the circa RUB422bn and RUB624bn they earned in July 2016 and 2017, the tail-end of Russia’s last crisis.

July was the first month where Russian companies caught up on last year’s profits after a disastrous March-May period that saw profits more than halve compared to last year.

Ahead is the slow August holiday month when profitability is always modest, but what will happen in the autumn remains uncertain, as the rate of coronavirus infections has been accelerating fast in the last week of September. The infection rate in Moscow doubled from 1,000 per day to 2,000 and at the time of writing the Moscow City authorities had already ordered anyone over the age of 65 to stay at home. While the Moscow authorities say there are no plans for a lockdown, they said that in May too, and then suddenly imposed a very strict lockdown.

On top of this, the ruble has been weakening rapidly in the last week of September, falling to RUB79 to the dollar and passed RUB90 to the euro due to the rising geopolitical risks from a coronavirus (COVID-19) second wave, the Kremlin’s backing of Belarus' self-appointed President Alexander Lukashenko in Belarus, the showdown with Washington over the fate of the Nord Stream 2 pipeline and the scandal that followed the assassination attempt on anti-corruption blogger and opposition activist Alexei Navalny. While economists say the fair value of the ruble is closer to RUB65 to the dollar, they also say they expect the rate to go to RUB80 before the year end and that will stoke inflation and further depress corporate profits before they recover next year.

To offset this slowdown the government has launched various schemes to stimulate the economy. A mortgage subsidy programme has been especially successful, and subsidies and delayed tax payments have also helped. While some of these subsidies expire in the autumn (the mortgage programme has already been extended), the new 2021-2023 budget includes greatly increased support for SMEs and individuals at the expense of increased taxes on the wealthy and raw material producers. However, some commentators and government agencies worry the net effect of these tax rises will be to slow the economy. A rapid rise in oil prices would also work to boost economic growth, but that is not anticipated to begin until next year, if then.

Question? Get in touch with sales@intellinews.com

Biggest increase was in automotive fuel sales, up by 13.4%.

GDP down in annual terms but increased by 6.6% on second quarter as economy started post-lockdown recovery.

The coronacrisis has cost Russian companies RUB3.8 trillion ($47bn) in lost profits this year as of August this year, according to the latest data available.

New coronavirus infections continued to rise alarmingly in Central and Southeast Europe as the centre of the pandemic shifts back to Europe.

World Bank forecasts Serbia’s economy to shrink by just 3% as it benefits from the Western Balkans’ biggest stimulus package and a low share of tourism in the economy.