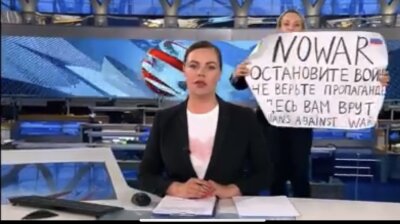 Marina Ovsyannikova is an editor at the First Channel and walked on set during a live broadcast of the evening news with an anti-war poster and shouted "stop the war" before she was arrested. / twitter
By bne IntelliNews March 15, 2022

A Russian editor at the First Channel walked on to the set during the live broadcast of the evening news on March 14 holding a poster saying: “No war. Don’t believe the propaganda. They’re lying to you here.” She was immediately arrested and human rights lawyers are unable to find her whereabouts.

At about 9:35 pm Moscow time, as First Channel host Yekaterina Andreeva was hosting the prime time news show Vremya and reading the introduction to a story about countering Western sanctions, Marina Ovsyannikova entered the frame with an anti-war poster and shouted several times: “Stop the war! No war!” Editors rapidly cut away to the start of the sanctions story.

Ovsyannikova is an editor at the First Channel, Russia’s biggest broadcaster, who recorded a statement before her protest where she said her father was Ukrainian and called for protests and an immediate end to the war.

“What is happening in Ukraine now is a crime. And Russia is an aggressor country. And the responsibility for this aggression lies on the conscience of only one person. This person is Vladimir Putin,” she said in a statement recorded on her Facebook page earlier the same day.

Ovsyannikova said that her father is Ukrainian and her mother is Russian, “and they were never enemies.” She stated that "Russia must immediately stop the fratricidal war" and called on Russians to go to anti-war rallies.

Ovsyannikova was immediately arrested and taken to the police department of the Ostankinskaya district of Moscow, the head of Agora, a human rights group, told Meduza.

According to preliminary information, police will charge her with an administrative protocol against her under the new article 20.3.3 of the Code of Administrative Offences on “discrediting the use of Russian troops.”

Ovsyannikova’s protest could earn her anything between three and fifteen years in jail after the new laws were pushed through making it illegal to use the words “war” or “invasion” to describe the “special military operations,” as the Kremlin has dubbed it.

According to OVD-Info, Russia’s protest monitoring group, the police in the Ostankinskaya district denied Ovsyannikova was being held there, presumably afraid of protesters gathering outside the detention facility. Other reports say she was being held in the duty room of Moscow Ostankino television centre, the famous TV tower in the north of the city, but no one was allowed to see her.

The reaction to Ovsyannikova’s protest online was immediate and overwhelming with tens of thousands of comments and likes on her updated Facebook page.

Several prominent human rights lawyers immediately tried to find Ovsyannikova's whereabouts, but they were brushed off by police. Ovsyannikova’s former husband, an editor at RT, also refused to answer questions or comment on Ovsyannikova’s protest.

“Ten hours later, Marina Ovsyannikova is still missing. The human rights project @OvdInfo’s lawyers have been unable to locate her since her arrest,” tweeted Kevin Rothrock, an editor with Meduza.

Zelenskiy praised Ovsyannikova’s bravery in his daily address to the nation which has bolstered morale. In an address that flipped back and forth between Ukrainian and Russian he appealed to Ukrainians to be strong and appealed directly to the Russian soldiers to lay down their arms. He also singled out Ovsyannikova and her protest for thanks.

After giving an update on captured/destroyed equipment, Zelenskiy switched back to Russian. "I am grateful for those Russians who aren't stopping to tell the truth. Those who are fighting disinformation and are telling the truth,” he said. “Grateful to Russians who are telling the real facts to their friends, close ones, loved ones. And personally to the lady who walked into the studio of Channel 1 with a poster against the war. Those who aren't afraid to protest."

After the incident, Frist Channel began an internal check, Interfax reports with reference to the channel's press service. “On the air of the Vremya program, there really was an incident with an outsider in the frame, an internal check is underway,” the channel said.