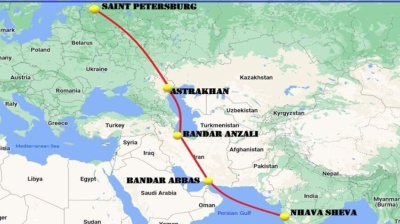 One of the proposed routes of the growing INSTC trade corridor project. / Tehran Times.
By bne IntelIiNews July 13, 2022

An initial Russian freight train has arrived at Iran’s Sarakhs railway station in Khorasan-Razavi province on the border with Turkmenistan, IRNA reported on July 12.

The rail haulage development is important in the context of the accelerated development of the International North-South Transport Corridor (INSTC). A big aim of the corridor is to provide Russia with substantial import-export trade access to the Persian Gulf and Sea of Oman (Indian Ocean) via Iran, while also allowing it to develop trade links with Iran’s Arab neighbours to the west. INSTC has been under discussion for years, with little tangible progress in realising the project, but it has taken on a new lease of life given how Western countries have cut off access to Russian hauliers following the invasion of Ukraine. The Iran route now provides Moscow with increasingly vital options when it comes to trade with India and other points east.

The Russian freight train is reportedly pulling 39 containers with building materials for India. It departed from Chekhov station in the Moscow region before covering 3,800 kilometres to reach Sarakhs.

Iranian Minister of Roads and Urban Development Rostam Qassemi said the locomotive would move on to the port of Shahid-Rajei in the province of Hormozgan in southern Iran. From there, the containers with cargo will go to India by sea.

"Thanks to good agreements and contracts concluded with countries such as Russia, Kazakhstan and Turkmenistan, as well as the availability of this route for the delivery of Russian goods to countries such as India, the train will continue to travel along this route," Qassemi said.

INSTC backers point to how the corridor offers shorter routes than alternatives that go via the Suez Canal.