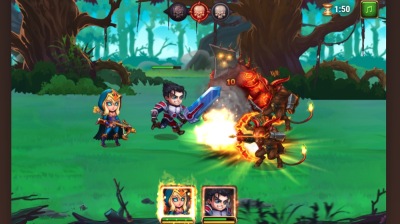 The Russian-born top five independent game maker Nexters, which is preparing to go public on Nasdaq later this year, upgraded its financial outlook for 2021 from existing and new titles in 2021 on July 1.

The company, which is best known for its game “Hero Wars,” was relatively unaffected by the coronavirus (COVID-19) pandemic and continues to see sales grow, although it had to revise its forecasts for 2021 and beyond as a result of the pandemic.

“Mobile player behaviour has not experienced any negative change since the start of 2021. Players’ spending proceeded to grow, as Monthly Average Bookings Per Paying User grew by 7% in Q1 2021 compared to Q1 2020 and reached $115,” the company said in a statement.

Nexters is an international game development company which strives to introduce the joy of core gaming experiences to casual players. Thanks to such hit games like Hero Wars, Throne Rush, and others the company reached over 100mn installs worldwide and became one of the.

Set up in 2010 and now headquartered in Cyprus, Nexters has become one of the top five independent mobile game companies in Europe. It has a team of over 500 game developers and continues to develop commercially successful game for an international audience.

Nexters generated $318mn in Net Bookings and $120mn in free cash flow to Equity in 2020; the expected continued growth of Hero Wars and new mobile game titles launching in 2021 are projected to drive Net Bookings to $562mn in 2023, after platform fees.

“Nexters has delivered best-in-class profitability and growth, scaling its net bookings 10x in two years to $318mn in 2020, while staying well-diversified across key gaming markets. As of 2020, 35% of Company’s net bookings came from the United States, 23% from Europe, and 19% from Asia,” the company said on its website. “Nexters aims to become the leading consolidator in the gaming space in Russian speaking countries, Eastern Europe and beyond, capitalizing on the significant opportunity in the market while deploying its proven value creation playbook to support the companies it acquires.”

Nexters’ total bookings in the first quarter of this year reached $113mn, 15% higher compared to the same period of 2020, resulting in estimated revenue growth of 48% year-on-year, according to preliminary estimates.

Its flagship product, Hero Wars RPG, was downloaded 36mn times in 2020 on iOS and Android alone, scoring a 4.5/5 average rating from its users.

“The growth has been supported by new marketing initiatives and acquiring users with forecasted paybacks above initial expectations, which led to an increase in the number of Monthly Paying Users by 9%,” the company said in a statement. “To capitalize on the Q1 growth, the company has increased its marketing campaigns and achieved an increase in Monthly Paying Users of 42% year-on-year in April 2021.”

The strong performance in the beginning of the year allowed Nexters to significantly update the forecast for 2021 bookings, which are expected now to grow at 38% y/y to reach around $610mn for the full year.

“Our games won’t stop being fun when the pandemic ends,” Nexters CEO and Cofounder Andrey Fadeev said. “On the one hand we see an ongoing growth of Hero Wars, a “forever franchise” first released in 2016. On the other we see some promising results from new titles such as Chibi Island. Our strong performance from both new and well-established titles positions us well for our anticipated upcoming listing on Nasdaq,” he added.

On February 1, Nexters and Nasdaq-listed Kismet Acquisition One Corp, a special purpose acquisition company (SPAC), entered into a business combination agreement that will result in Nexters becoming a publicly-listed company on Nasdaq later this year.

The transaction values Nexters at $1.9bn and will be funded by approximately $250mn held in trust by Kismet, subject to potential redemptions, as well as the additional $50mn investment by the SPAC Sponsor, Kismet Capital Group. The deal is expected to close in 2021, according to Nexters.

Founders Fadeev and Boris Gertsovskiy, as well as the other minority shareholders of Nexters – including Igor Bukhman and Dmitrii Bukhman of Playrix – will roll 92% of their holdings into the combined company and agree to a 12 month lock-up; Kismet Capital Group (via affiliate) will invest $50mn in additional capital to ensure alignment with founders, existing shareholders and public investors, Nexters said on its website.

Kismet Acquisition One Corp. is the first SPAC set up by Ivan Tavrin, a TMT entrepreneur and the founder of Kismet Capital Group; Mr. Tavrin brings experience in M&A and public markets to this transaction, and will serve on the board of the combined company as an independent director.