Russian inflation falls again to 14.9% in August, fears of a deflationary spiral grow 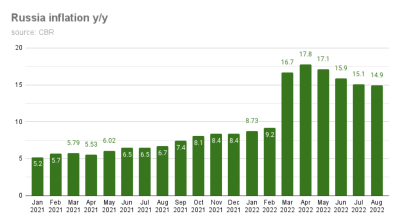 Russia's inflation fell again to 14.9%, driven by tumbling food costs. With the economy slowing and the population's inflation expectations dropping, some worry that a deflationary spiral could appear. / bne IntelliNews
By bne IntelliNews August 19, 2022

Inflation remains high but is being driven lower by a precipitous fall in food prices that has led some economists to worry that Russia runs the danger of falling into a deflationary spiral that could last for years.

The imposition of a “massive package” of sanctions by the West has slowed growth, resulting in falling demand. If the population gets to the point where inflation expectations turn negative and they expect prices to fall in the future, then that has the effect of reducing demand further and those expectations become a self-fulfilling prophecy. Deflationary spirals are destructive and can last for years.

In the CBR’s new gloomy monetary policy strategy released on August 12, the regulator reiterated its goal of bringing inflation down to its target rate of 4% in the nearest future and of targeting inflation as its top priority.

While the rest of Europe is still suffering from record levels of inflation that is still rising in many countries, the CBR’s fast action following the invasion of Ukraine in February has effectively capped inflation. Russia is currently the only country in Europe where inflation is falling.

The fall in prices is accelerating, as the pendulum may be swinging too far in the other direction, warn analysts.

“RosStat reported an acceleration in weekly deflation in Russia. The federal body reported yesterday a 0.13% w/w price decline for the period 9-15 August, while in the previous week, deflation was less than 0.1% w/w,” BSC GM said in a note. “This dynamic implies a 0.23% price contraction since the beginning of the month; hence annual inflation moderated to 14.9%, down from 15.1% y/y in July. Lower food prices have remained the main driver of weekly deflation in the first half of August.”

The regulator has plenty of tools to prevent the fall in prices from getting out of control. The CBR has already cut rates four times since the CBR more than doubled interests to 20% on February 28, days after the war began, and rates are currently below pre-war levels at 8%. (chart)

Further rate cuts are expected as the CBR has also switched its focus to support more growth to cushion against a 5% contraction in GDP this year.

“While inflationary risks, driven by expected ruble depreciation in 2H22 and an increase in government spending, seem high, sustainable deflation for three consecutive month and lower inflationary expectations may force the regulator to continue its rate cut cycle at the upcoming meeting on 16 September; however, at a more moderate pace,” BCS GM said.

Russia on track to have a record-smashing grain harvest
12 hours ago
Bosnia posts annual CPI inflation of 16.8% y/y in August
21 hours ago
IMF sees Romania’s economy growing by 4.8% in 2022, analysts are even more bullish
1 day ago
Moldova’s manufacturing activity plunges to levels not seen since lockdown
5 days ago
Analysts wrong again as 'unorthodox' Turkey cuts rates another 100 bp
6 days ago