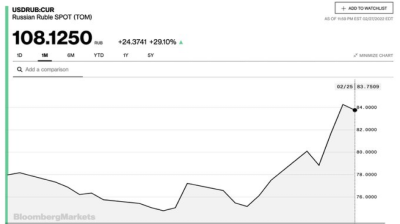 Russia is bracing itself for a second crash after the West announced it would freeze up to half of the Central Bank of Russia’s (CBR) international reserves. The ruble immediately crashed to RUB108 to the dollar and the regulator announced that both the stock market and currency trading exchanges would remain closed until 3pm local time on February 28 as markets absorbed the news.

There remains a lot of uncertainty over just how exposed Russia’s $643bn in reserves – the basis of Russian President Vladimir Putin’s fiscal fortress – is to the sanctions. Initial estimates range from 40%-60%. European Union's top diplomat Josep Borrell said in comments on February 27 that as much as 50% of the reserves can be frozen.

Even cutting the reserves in half would still leave some nine months of import cover – more than enough to ensure the stability of the currency in normal times, but analysts point out that if there is a panic the CBR could be forced to burn through those reserves in order to main stability. The regulator was already forced to intervene in the market on February 24 to stop a meltdown of the ruble, which fell to just under RUB90 to the dollar after Russia’s attack on Ukraine on February 24 for the first time since the annexation of Crimea in 2014. The CBR intervention pulled the ruble back to RUB84 on that day but this time it rapidly blew through the important RUB100 to the dollar mark, with some analysts predicting it would go past RUB115 on February 28.

Tim Ash, senior sovereign strategist at BlueBay Asset Management, ran an informal Twitter poll on what his followers thought the end point would be and half the respondents believed the ruble would fall past RUB300 to the dollar. That result is highly unlikely, but highlights just how panicked the market is as trading is poised to resume after the weekend's news.

“Hearing ruble being quoted up as far as 115 for tomorrow, from 83 on Friday. Putin is setting stage for financial collapse of Russia. So much for Fortress Russia as really devastating sanctions now roll out,” Ash said in a tweet.

The ray of hope that might counter the nerves is the first round of peace talks between Russia and Ukraine that are due to begin in the Belarusian city of Gomel close to the border on February 28. This could lead to a ceasefire; however, the prospects for an agreement remain very low, according to observers.

Protests against the war immediately broke out following Russia’s invasion and have continued as tensions reach critical levels. A driver ran his car into the barriers on Pushkin Square in the heart of Moscow daubed with graffiti saying “no to war”, “people arise” and “Putin scum.” And top oligarchs Oleg Deripaska of the Rusal aluminium producer and Mikhail Fridman of the Alfa Group both came out publicly condemning the war. Even more surprisingly, Kremlin insider Anatoly Chubais posted a picture of the late Boris Nemtsov, who had been a possible alternative to succeed Boris Yeltsin as president in 2000 but was assassinated on the Kremlin bridge in 2015.

CBR prepares for a meltdown

Russia's central bank ordered stock market traders to suspend the execution of all orders by foreign legal entities and individuals to sell Russian securities from Monday morning in an effort to prevent a meltdown after the CBR sanctions were introduced, Reuters reports, citing an internal document.

The ban on executing sell orders is open-ended, effective from 7am on February 28, and will remain in place until the CBR issues “cancellation orders”.

The document does not specify whether it applies to government securities. The order does not apply to applications submitted before 7am Monday.

“Russia's central bank says equity trading on Russia's leading stock market will be suspended until at least 15:00 Moscow time (12:00 GMT),” Jake Cordell, a journalist with the Moscow Times, said in a tweet. “It kept open the possibility of a full-day closure, saying only that the bank will make a decision at 13:00 on whether to open.”

Prior to the invasion on February 24 the RTS was trading in a band between 1,200 and 1,500, but fell to 745 after Russian troops crossed Ukraine’s border. That is slightly lower than the floor of 800 the RTS fell to during the start of the coronacrisis and oil price shock in April 2020 during its last big sell-off.

In the biggest crisis prior to 2020 the RTS fell to a low of 500 in 2008 at the start of the Global Financial Crisis, before recovering to around 1,000 a few months later.

The peace talks in Belarus came the same day as Putin put Russia’s nuclear forces on alert due to “aggressive moves by Nato”, which has only increased tensions further.

As bne IntelliNews argued in a recent opinion piece, Putin is playing a “game of chicken”, where he is slowly ratcheting up pressure in order to force Ukraine to concede on Russia's demands to forego Nato membership and declare neutrality.

“I still think brinksmanship/miscalculation is the right frame to understand Putin's decision-making. If you think the other side will fold fast, and that the world has already resigned itself to Ukraine being in the Russian 'sphere', the risks seem manageable,” Professor Sergey Radchenko of the John Hopkins University said in a tweet.

But Radchenko also points out the war in Ukraine doesn't seem to be going as well as planned, forcing Putin to escalate again.

“He gambled, and he failed, and that's why we are back to brinksmanship with nuclear threats. Nuclear brinksmanship is underpinned by rational calculations about the other side's likely reaction. Khrushchev's certainly was,” Radchenko said, referring to his arguments that the current crisis is very similar to the “Berlin crisis” in 1961 that ended with the construction of the Berlin wall.

According to these arguments, if the talks in Belarus fail then Putin will step up the violence in Ukraine another notch and could unleash infantry in attacks on major cities and maybe storm Kyiv, which would lead to major destruction and a significant loss of life.

Emergency rate hikes on the way

As the ruble goes into free fall, the CBR is very likely to react with emergency rate hikes. When the ruble last crashed to RUB80 to the dollar in the 2014 crisis following an oil shock the regulator was forced to hike rates to 17% to stop the bleeding.

The CBR then spent the next five years cutting rates, which fell to a post-Soviet low of 4.25% in July 2020 until inflation roared back with the coronacrisis.

The central bank was expected to hike rates maybe one more time this year but analysts said the tightening cycle had more or less come to an end.

Those bets are off now with the collapse of the currency and the CBR is now highly likely to put in another large rate hike and put a floor under the ruble’s value, undoing all of the progress of the last five years to bring overnight interest rates down to “normal” levels.

That will also hit growth. The outlook for growth this year was for 2.2%-2.4%, but as Capital Economics wrote in a recent note, the outlook now is for a 5% contraction, or worse.

HESS: West wins the default battle, but the economic war must go on

HESS: West wins the default battle, but the economic war must go on
NEMETHY: Is the US Fed playing with the wrong levers?
Gold and an energy price cap on G7 summit agenda

Russian President Vladimir Putin has called on BRICS countries to support Russia in the face of "selfish actions" from the West. The summit of BRICS leaders is being hosted by Beijing via videolink.