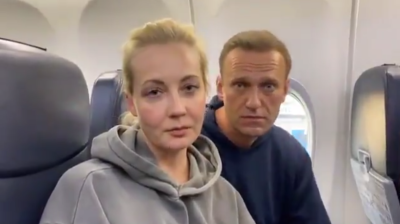 Jailed anti-corruption blogger and opposition activist Alexei Navalny has called on Russians across the country to take to the streets this weekend on Saturday January 23.

“Do not be silent. Resist. Take to the streets – not for me, but for you,” Navalny said in a short video statement released after his hearing held in a police station, where an impromptu court had been set up a day after he was detained at Sheremetyevo after he arrived home from five months in Germany.

Navalny appears to be hoping for a repeat of the 2013 demonstrations where thousands of people gathered outside the Kremlin walls to protest against his arrest at that time. On that occasion the Kremlin backed down and released him, but this time round the stakes are a lot higher.

The head of Navalny’s regional network, Leonid Volkov, said preparations were underway for protests to be organised across the country on Saturday.

The weather is against him, as temperatures have plunged to -20C in recent days and snowfall has been heavy. However, a few supporters had already gathered on the street outside the police station where he was being held, one of whom was carrying a pair of blue underpants on a pole – a reference to the claim that the Novichok used on Navalny was smeared on the inside of his underpants.

Navalny’s appeal for mass demonstrations to protest against his arrest has strong echoes of the mass protests that remain ongoing over the border in Belarus.

As in Navalny’s case, two of the leading opposition figures – popular video-blogger Sergei Tikhanovsky and ex-banker Viktor Babariko – were both jailed in the run-up to the August 9 disputed presidential elections that led to a series of swelling protests that erupted into violence on the same day as the elections.

Both men have remained in jail, but the protests continue and releasing them is one of the key demands of the protesters. On the same day as Navalny was arrested, Amnesty International officially named Navalny a prisoner of conscience.

At the same time, Navalny’s wife, Yulia Navalnaya, flew home with her husband and was with him, and in the camera’s focus, up until the point he was led away by police.

One scenario would be that Navalnaya stands for election in the September Duma elections in her husband's stead, copying opposition leader Svetlana Tikhanovskaya's decision to do the same in the Belarusian election.

After her husband’s arrest, Navalnaya went out on to the street to address the waiting crowd.

“Alexei is not afraid. I’m not afraid either and I call on you all not to be afraid,” she said over chants of “Yulia!”

Navalnaya has been playing an increasingly public role since her husband was poisoned. She rapidly flew from Moscow to Omsk, where he had been hospitalised in a coma in August and publically berated the doctors who were refusing to let her see her husband, after they asked for proof that they were married.

She then co-ordinated the effort to get an ambulance plane from Germany to transport her husband to Berlin, as well as fielded questions from the press corps that quickly arrived on the scene.

In perhaps her boldest move, she directly addressed President Vladimir Putin, requesting permission to let them bring her husband to Berlin. The Russian authorities dragged their heels on releasing Navalny to the waiting plane for as long as they could, but with the high tech, well-equipped plane standing on the tarmac and Navalny in a critical condition they could not refuse. Navalnaya can take a large amount of credit for forcing that decision through.

The poisoning saga represented her “moment of transition from an accompanying figure to an independent character,” said Alexander Baunov of the Carnegie Center in Moscow as cited by the Moscow Times. “Now that Alexei is arrested Navalnaya will act independently.”

Saved by the demo

There have been several instances of popular protests following the jailing of Russian journalists on trumped up charges that have successfully led to the detainee's release.

When Ivan Golunov was arrested on drug possession and dealing charges, in a case that colleagues said was obviously falsified, hundreds of demonstrators gathered outside the police station. At the same time the three biggest newspapers all ran identical front pages saying: “I/We are Ivan Golunov” in a rare act of open defiance. The charges were quickly dropped and Golunov was released.

Navalny’s case is in a different league, as not only does he have higher name recognition in Russia but he is also working actively to undermine the Kremlin’s plans to manage the September general election, and to prevent as many members of the ruling United Russia Party from getting election using his “smart voting” technique as he can.

On top of that, Navalny has a lot of support from the international community, where he has become an icon for liberal and democratic values.

He returned to Russia from Berlin where he was medevac’d after he was poisoned with Novichok during a trip to Siberia. While recuperating in the Charité hospital he received a personal visit from German Chancellor Angela Merkel, who has thrown her support behind him.

But the call for mass rallies is a high-stakes gamble, as if the turnout is low then Navalny is likely to be quickly convicted and will spend at least 3.5 years in jail for a suspended conviction in the Yves Roche fraud case that was brought against him in 2014, and possibility up to 10 years in prison on new charges.

There is a potential new criminal case after a probe was launched late last year by Russian investigators, who say he misappropriated over $4mn worth of donations. Navalny says all the charges are politically motived.

While Navalny is well respected in Russia as an anti-corruption activist, he has a much lower standing as an opposition politician and registers at around 2% approval rating in the independent pollster the Levada Center political ranking polls.

The Russian opposition movement remains fragmented and fractious. It has failed to present a united front in any of the previous elections and lacks a clear platform that is any more than “not Putin”. Previous attempts at creating a unified front or getting behind a single candidate have ended in infighting and bickering. Navalny has disassociated himself from the other opposition movements and has not built a political party of his own per se. His group refers to itself as “Team Navalny”.

That means Navalny will have to rely on his own informal network to muster crowds in sufficiently large numbers to intimidate the Kremlin into backing off. And with the stakes so high, even if there are very large crowds the Kremlin may still decide to just tough it out. With a general election in six months' time, the Kremlin may calculate that it is better to lance the boil now than wait until near the vote, when the pain will be fresher in people’s memories.

Navalny was held in remand for 30 days by a makeshift court set up in a police station on the outskirts of Moscow where he was being held.

He appeared in a room for the hearing clearly confused, and explained to a camera that he had been told he was going to meet his lawyers, not attend a hearing.

His lawyer was similarly caught off guard and was handed the court documents for the hearing only one minute before the proceedings got underway.

Navalny appeared genuinely shocked at the transparently kangaroo court nature of the proceedings, as he explained to a camera. “I’ve seen a lot of mockery of justice, but the old man in the bunker [Putin] is so afraid that they have blatantly torn up and thrown away” Russia’s criminal code, Navalny said. “This is ultimate lawlessness.”

The quip about the “old man in the bunker” quickly spawned an explosion of memes on the Russian internet. Navalny has a talent for skewering his political rivals. His moniker of United Russia as the party of “crooks and thieves” stuck like mud and the party has never been able to shake it off.

Russia’s services PMI positive at 52.2, but down slightly from January

Sanctions risk on Russia is over-priced

Russia’s services PMI positive at 52.2, but down slightly from January
US sanctions Russian officials over Navalny
Sanctions risk on Russia is over-priced

Stock market unrattled by symbolic punishment but Kremlin is expected to respond anyway.

Poland will transfer €33bn worth of assets from private pension funds back within the state-run system.

Slovak procurement is another propaganda coup for the Kremlin and could further destabilise the country's rocky four-party coalition.