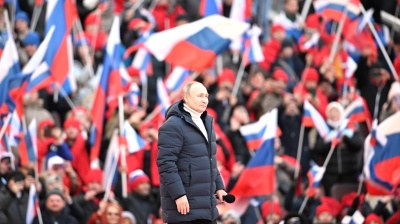 An independent poll released on Wednesday, 30 March appears to show that Russian support for both Vladimir Putin and his United Russia Party has increased substantially since the invasion of Ukraine. The Levada Centre, one of Russia’s few remaining independent pollsters, puts support for Putin at 83%, a level exceeded only in June 2015 following the annexation of Crimea.

The Levada Centre has been keeping track of the sentiment among the Russian population, including approval of the ruling United Russia Party, support for the direction in which the country is moving, and approval of Putin’s activities. In February, the latter figure rose to 71% as the president’s popularity received the boost which commonly accompanies the beginning of a war.

In March, as Russian troops continued to bombard Ukrainian population centres with artillery, all of the Russian government’s notable approval ratings rose. Approval of the actions of Russia’s government rocketed from 55% in February to 70% in March. The proportion of those asked who felt that Russia was moving in the right direction increased from 52% in February to 69% this month. Most strikingly, approval of Putin’s activities is up to 83% from 71% last month. 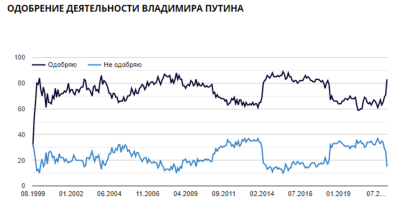 Conversely, the proportion of Russians who consider that Russia is moving in the wrong direction has decreased from 38% to just 22% in the space of one month. Trust in Russian President Vladimir Putin is up by 10% at 44%, according to Levada Centre. Polls by British pollster YouGov suggest that only 11% of Brits considered Prime Minister Boris Johnson trustworthy in February 2022. Russian trust in Defence Minister Sergei Shoigu is also up. 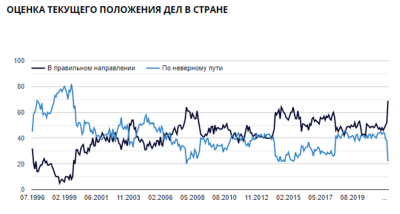 Russians who consider that the country is moving in the right direction.

Critics have suggested that those willing to answer pollsters’ questions are not likely to be a representative sample of the Russian population, as in a country where it is becoming increasingly dangerous publicly to hold dissenting opinions, it is unclear what people really think.

Russia’s government has cracked down on freedom of speech and freedom of the press in the month since it invaded Ukraine, in tandem with an extensive propaganda campaign to boost approval for the war.

Following a pro-war rally in Moscow’s Luzhniki stadium in March, some of the attendees told the BBC that they worked in the public sector and were pressured into going by their employers. One man at the rally, who worked for the Metro, reportedly told the BBC that “I think most people here don't support the war. I don't."

New laws mean that anyone accused of “discrediting the Russian armed forces” or “spreading fake news” can be handed a jail term, and protesters against the war have been handed fines and even expelled from universities.

In this context, it is less likely that those who oppose the government would publicly voice their dissent, even to an independent pollster.

Meanwhile, the Russian government is pressing ahead with a course of special lessons on the war entitled “My Country” for senior school students. On Monday, the Ministry of Science and Higher Education instructed educational institutions to conduct a “unified lesson” in April to teach students about World War II. Education officials in St Petersburg have instructed schools and universities to hold this “unified lesson” on April 19, and to teach students about Nazis and their modern-day “accomplices”. Students are encouraged to write about their lesson on social media afterwards.