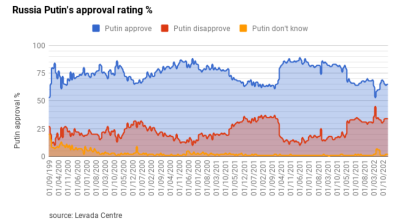 Russian President Vladimir Putin's popularity ticked up 1pp from 64% in January to 65% in February, while the propensity to protest leaped around 10pp
By bne IntelliNews February 28, 2021

Russian President Vladimir Putin's popularity ticked up 1pp from 64% in January to 65% in February according to the latest poll from independent pollster the Levada Center, regaining the levels prior to the weekend mass protests called for by jailed anti-corruption activist and opposition politician Alexei Navalny in January.

However, the biggest change in recent months has been the propensity to protest, with both political and economic demands having almost doubled: the two indicators were up 12pp and 8pp from 23% and 25% in November to 45% and 43% respectively in January, according to Levada.

This tallies with the fall in Putin’s trust rating in recent years, but is also clearly not driven by the mass protests called for by jailed anti-corruption activist and opposition politician Alexei Navalny in January, as Putin’s trust rating actually improved by 3pp between December and February, while that of Navalny fell 1pp to 4% over the same period.

In another poll released on February 26, Levada found that half of Russians (48%) would like to see Putin as President of Russia after 2024, while 41% want him to go. The results have changed little from last year and the differences are within the margin of error, form a year earlier when 46% supported Putin’s re-election and 40% did not.

Among the most frequent reasons why they want to see Putin to remain president after 2024 is the recognition of his services to the country (30%), recognition of personal merit (25%) and good foreign policy (19%).

More than half (53%) of those who do not want Putin to be president after 2024 intend to vote for another candidate in the elections. Another 30% are not going to to vote. 7% are in the mood for protests, and 5% will leave the country.

Overall, the Russian population still approve of Putin, as his approval ratings show, but they are becoming increasingly dissatisfied with their deteriorating situation as his falling trust ratings show.

Navalny has been important in that he has sparked a national discussion about what is wrong with Russia, but as another Levada survey in February showed, the majority of Russians are indifferent to Navalny’s fate, and those that have an opinion are equally divided between approving of Navalny and disapproving of him. Navalny plays the role less of an opposition leader or potential new president than that of a catalyst that will provoke more political awareness in the Russian people and more importantly, within the existing systemic political parties, which has the potential to change Russian domestic politics from within the system.

Little change in the approval of the rest of the government

The popularity of Mishustin fell by 1pp from 56% in January to 55% but his disapproval rating remained the same as more Russians moved into the undecided category.

Likewise, the approval of the government fell by 2pp to 47% and those that disapprove rose by 1pp to 50% as 1pp of Russians moved into the undecided camp.

On the whole, Russian trust in both Mishustin and the government has fared fairly well during the coronacrisis, as the government’s handling of the situation was seen as competent. Nevertheless, the Navalny inspired protests show that the population is still unhappy with the gradual decline in the standard of living that is reflected in Putin’s trust rates (see article above).

The approval rating of the regional governors fell 1pp but remains very high, almost on a par with Putin’s rating. The approval rating of the governors fell to 61% in February, while the disapproval ticked up 1pp to 35 and the undecided remained the same at 4%. Governors have been in the front line dealing with the fall-out from the coronacrisis but on the whole have been responsive and capable in dealing with the public health emergency.

Still, the approval rating in February is still ten points higher than the recent low of 30 in August 2018 but 14 points below the last high of 54% in December 2015.

RIMMER: King of the swingers
Navalny rally disappoints on a low turnout
Czechs give ultimatum to Russia to let expelled diplomats return to Moscow

Czechia and Slovakia recorded the highest excess mortality rates in the EU in February
14 hours ago
Polish PPI expansion picks up to 3.9% y/y in March
19 hours ago
Moldova’s currency falls amid weak exports, no grants
1 day ago
Romania’s Chimcomplex shares soar by 29% on WSE listing news
2 days ago
Montenegro’s public debt spikes at 82.48% of GDP in 2020
2 days ago