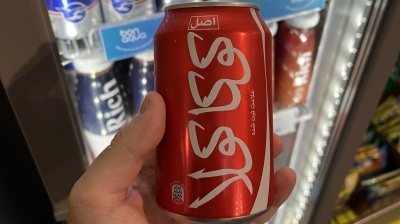 The White House might be tempted to describe it as another sign of Russia’s dire economic straits in the face of the economic backlash to the invasion of Ukraine, but, hey, mocking what you don’t know is uncool—Iran-made Coca-Cola, replete with Perso-Arabic script, has entered the Russian market, bne IntelliNews can report.

Photographs taken in stores in Russia show Iranian Coke, produced under licence in Iran, has made its way into Russian stores. Described by bne’s Iran correspondent as “very sweet”, the Iranian version of the beverage is taking up shelf space vacated by Russian-made Coca-Cola since The Coca-Cola Company suspended its business in Russia in March in response to Moscow’s invasion of Ukraine.

The arrival of the Persian Coca-Cola brand came as a shock to Russians looking to quench their thirst with “The Real Thing”.

One Russian social media account dubbed the drink “Aya-kola”, while another quipped that after two sips of the Iranian Coke “you will be defending the Islamic Revolution, and with three sips you’ll be off to fight in Yemen.”

Soft drinks from several countries have turned up on the Russian market since sanctions and market boycotts disrupted Russia’s economy, according to social media posts. Products from countries including China and Montenegro have been spotted, while a Dr Pepper from Poland is also now seen in Russian shopping baskets.

The Russian introduction of Iranian Coke—with the product retailing at around Russian ruble (RUB) 60 ($0.99) per can—signifies that suppliers in the Islamic Republic are making real headway in sending their products to Russia’s disrupted consumer markets.

Russian media reports in recent months have described trade entrepreneurs trying to plug dozens of market gaps with Iranian alternatives. The US even fears Moscow is addressing a lack of manufacturing potential for the making of armed drones by acquiring hundreds of Iranian drones.

Iran’s decades of international isolation since its 1979 Islamic Revolution have forced the country to perfect the emulation of a huge number of products unobtainable in sufficient volumes from abroad, or to evade sanctions in sourcing products. Russia is now on the same road and is turning to Iran for advice.

One thing’s for sure, the sad events that led to the departure of Coke from Russia certainly don’t jive with Coca-Cola’s famous 1971 “I’d like to buy the world a Coke” advertising campaign.