Russian unemployment could rise to 7.8% this year on sanctions shock and deep recession 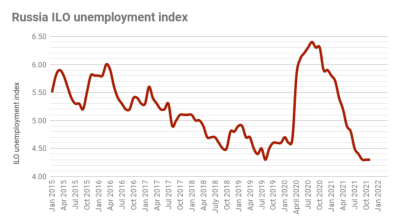 Russian could lose about 2mn jobs, causing unemployment to rise from 4.4% to 7.1-7.8% by the end of this year, Kommersant reported on March 29, citing analyst forecasts described in a report by the Center for Strategic Developments (CSR).

The worst of the shock from the extreme sanctions imposed after Russia’s attack on Ukraine on February 24 will hit the economy in the second quarter of this year and will lead to between an 8% to 15% contraction in 2022 and a 3% contraction in the year after, according to experts.

By the summer of 2023 the labour market will begin to recover, but the second scenario suggests that in the event of a long-term structural downturn, the unemployment rate could rise to 6.4-6.5% over the next few years, according to the study.

In the 2008 crisis unemployment rose to about 8.5% and in 1998 it was around 12% at its peak. During the coronacrisis in 2020 unemployment rose to 6.3% in August that year but quickly recovered back to its post-Soviet low of 4.3% once the vaccines appeared on the market.

The first scenario is supported by the fact that many foreign companies have retained their staff despite the suspension of activities. Under any of these scenarios, the structure of employment will change, the CSR noted. The number of jobs will be reduced in industries that depend on the supply of components from abroad, as well as in industries that have lost foreign or domestic markets due to sanctions.

Other industries will face an increase in demand for products in the domestic market, which will require additional workers. These are industries in which the main competitors have left the market (textile production, IT), imported products have risen in price due to the depreciation of the ruble (clothing, leisure goods) and deliveries have been stopped due to sanctions (microelectronics, telecom equipment). Analysts noted that the demand for workers in these industries may partially offset the loss of jobs in others, but it is not known how much employees will have to update their professional skills, reports Vedomosti.

The scenarios proposed by CSR analysts are based on the assumption that labour legislation in Russia is relatively unchanged. However, according to the publication, employers' associations and the Higher School of Economics are currently preparing amendments to the Labour Code and the law "On Employment of the Population".

Earlier, the Russian tripartite commission for the regulation of social and labour relations (RTK) approved a draft government decree, which proposes allowing employees to get a new job without terminating the contract at the main place. It is expected that such a measure will be valid until the end of this year.

Minister of Labour and Social Protection Anton Kotyakov said earlier that Russian companies are not planning mass layoffs of workers. Since the beginning of the military special operation in Ukraine, the vacancy base has decreased by 122,195 positions to 905,448 positions. This conclusion was reached by hh.ru, comparing the number of job ads on February 21 and March 11. Demand for insurance company personnel, automotive business, HR specialists and administrative staff suffered the most.

Serbia's population continues to decline
4 hours ago
June PMI shows Turkish manufacturing sinking further into contraction territory
1 day ago
Russia’s manufacturing PMI in the black in June as the sanction shock starts to wear off
1 day ago
Russian economy stable in May, but demand and income contraction deep
2 days ago
CEE Economic Sentiment Indicators fall on polycrisis woes
2 days ago