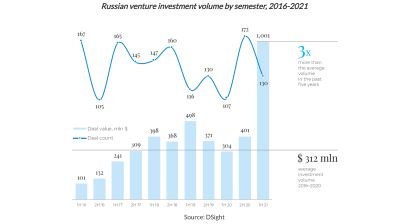 Dsight, a Moscow-based business intelligence company with a focus on investment, has just released the English version of its Russian venture report covering the first half of 2021, reports East-West Digital News (EWDN).

This is an all-time record, notes Dsight: “Over the last few months we have been watching the Russian market grow continuously, and cruise along to Europe’s top 10 venture regions,” writes the agency’s founder, Arseny Dabbakh.

The period was marked by the $250mn capital injection into ivi.ru, Russia’s leading online video platform, which involved state-owned financial institutions as well as Russian billionaires.

“This was not only the largest deal in H1 2021; it also beat everything the Russian venture market had seen” so far, notes DSight.

The first half of the year also saw many Russian tech entrepreneurs raise funds to develop their projects abroad – “not only crossing the Atlantic but also landing in Europe, Southeast Asia and Africa.” Several sectors are concerned, from food deliveries, to edtech, to medtech, to femtech.

Russian or not Russian?

“I believe our guys’ success abroad has the potential to markedly improve the situation in Russia, and to fuel growth in the domestic market,” writes Dabbakh, with a touch of optimism.

These international successes also pose a methodological issue: can the amounts amassed abroad by companies registered outside Russia be included in Russian venture data just because their founders are or were Russian and, in certain cases, because these companies are keeping an R&D team in Russia?

For example, Acronis’s $250mn round in May this year is included in Dsight’s stats, even though the company is headquartered in Switzerland and has its executive team located outside Russia – which is arguably safer for a cybersecurity company these days – while its founder, Russian-born Serguei Beloussov, has long been presenting himself as being a Singaporean, not Russian, citizen. The round itself was led by CVC, a major international private equity firm based in Luxembourg with little if any connections with Russia.

The emergence of angel networks

Among the interesting trends observed by Dsight is the growing share of early-stage business angel investments in Russia. Individual investors were not after numbers, concede the analysts, who identified only 31 deals involving them in H1 2021 – but they were after volumes, with total deal value doubling to $49mn and average deal value reaching some $2mn (+160% y/y).

“Angel clubs in Russia and investment volumes are only growing,” confirmed Alexey Solovyov, a figure of the Russian VC scene, in an exchange with East-West Digital News. He cited the example of AngelsDeck, the biggest BA community in the Russian-speaking space, which was involved in more than 70 deals this year.

“Russian angels invest collectively together with tier-one international funds. The emergence of business angel networks is perhaps the most significant trend this year in Russia,” Solovyov said.

Russian e-commerce turnover up 1.5-fold in 1H22
3 days ago
Home of the humbled lira, Turkey’s the biggest cryptocurrency market in the Middle East
4 days ago
Business Insider: Western tech majors have tested or used controversial Russian face recognition technology
10 days ago
From 4G to 6G: How Russia seeks to develop mobile networks amid shortages of domestic frequency and foreign equipment
10 days ago
Should I stay or go for founder of Russian internet major Yandex
14 days ago