Russians and Ukrainians in Sofia unite in fear, grief and anger 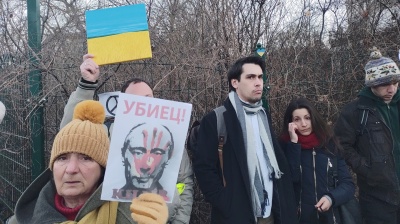 War has divided their countries but Russians and Ukrainians gathered outside the Russian embassy in Sofia on the day of the Russian invasion, alongside local Bulgarians, were united in shock, fear and anger. The thousands gathered there shouted with one voice: “Shame on Putin!” and “No to war”.

In the days since then, many Bulgarians have expressed their support for Kyiv and their willingness to help in any way they can. They are also fearful for themselves, after some concerning comments from Russian officials that sparked fear the conflict could spread.

Within the crowd, a young woman, holding her eight-year-old son, cannot stop crying. She is from Ukraine and has relatives there with whom she has lost contact.

Another young woman from Ukraine, Tonya, 28, says most of her family is near Mariupol and cannot escape.

“They [the Russians] are coming from everywhere, there is no escape anymore. We still have contact with them, I don’t know for how long. They have prepared the basements [to hide in there] and that’s it,” she says.

Her mother had arrived in Sofia few weeks ago to visit her, but the rest of her family is stuck in Ukraine.

“We have only our prayers left,” Tonya says. 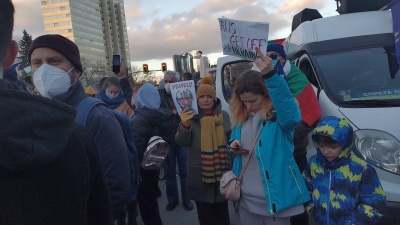 My dad will die

11-year-old L., living in Sofia, says his father went to Ukraine to fight for his country. His grandmother has coronavirus and is hiding in a bunker.

“I know that my dad will die there,” he tells his friends from school.

L. does not believe he will ever see any of his relatives in Ukraine again.

“No child should live with this horror,” nine-year-old Nina, friend of L., says. “We are supposed to be safe, aren’t we? I wish to go and tell that man [Putin] to stop this madness,” she continues.

“I have never been more ashamed of being Russian. I want to tear apart my Russian passport, even if that would mean to remain without any document. I want to cry. He is insane,” 34-year-old K.J., a Russian married to Bulgarian, tells bne IntelliNews.

She has two sons and is afraid to send them to school, fearing they might become targets of violence or bullying due to the war.

And even worse, she is afraid that her own safety and that of her husband, who is Bulgarian but a loud critic of Russian President Vladimir Putin, is not guaranteed even in Bulgaria.

“Russians have lists of inconvenient Bulgarians. My husband must be on one as he does not keep his mouth shut,” she says. 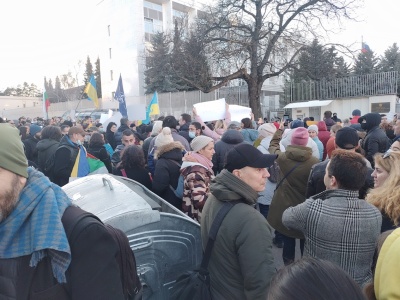 Bulgaria has opened its borders to refugees and on February 26 the first two buses organised by the government arrived in the country. More buses are expected in the following days. Foreign Minister Teodora Genchovska said that the authorities are seeking a corridor to take Bulgarians living in Ukraine out of the country.

Meanwhile, ordinary Bulgarians have been helping Ukrainians in any way they can – sending money, aid or information on how they can reach Bulgaria.

Although the Bulgarian government declared that it will organise transport and accommodation for Bulgarians living in Ukraine, as well as for Ukrainian refuges, many report they cannot find shelter. A Facebook group of people willing to help the refuges was quickly formed and people are offering rooms, houses, apartments, or just sofas. Clothes, food and transportation from the border with Romania are also offered.

But not everyone has condemned the Russian aggression in Ukraine. Bulgarians are ashamed of the lack of unity and decisiveness among politicians. Parliament debated for hours on a declaration condemning the invasion and two parties – the Bulgarian Socialist Party (BSP), which is part of the ruling coalition, and far-right Vazrazhdane – refused to back it.

Moreover, supporters of Putin laid flowers on a monument of the Soviet army.

“I am ashamed! How can people be so blind,” Mariyana, a 47-year-old ski-instructor, said.

Daniela, 45, says she has lost sleep and feels like crying all the time.

“But my tears are inside of me, I cannot cry them out because my children will be frightened,” she tells bne IntelliNews.

Fear for the future

Many people fear that the war could expand and reach Bulgaria, or that there could be other consequences such as skyrocketing inflation that would change their families’ lives for the worse.

These fears were fuelled by a February 25 statement from Russian foreign ministry spokesperson Maria Zakharova, who said Moscow objects to the neo-Nazi Lukov march that took place in Sofia earlier in February. Her statement that this was unacceptable to Moscow was compared with Putin’s claims that Nazis are ruling Ukraine, one of the pretexts for the Russian invasion.

Fear of radiation spreading from Chernobyl – site of the world’s worst nuclear disaster that was taken by Russian forces shortly after the invasion – is also spreading and some people are considering buying devices to measure radiation levels, as well as first aid kits. 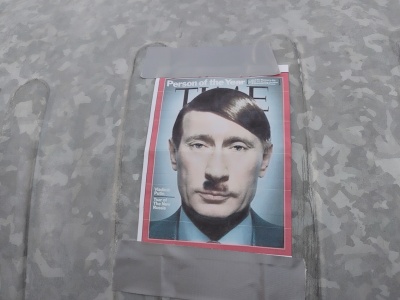