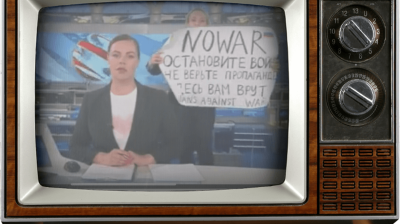 Three weeks after Russia invaded Ukraine, Channel One editor Maria Ovsyannikova interrupted a live bulletin with an anti-war message. She told viewers to turn off their TVs and stop believing the news reported by state-owned broadcasters. Fresh data suggests that Russian viewers are doing just that. / Image: bne IntelliNews.
By Theo Normanton May 19, 2022

Trust in TV news among Russians fell by around 10% in April, according to polling conducted by media investment company GroupM. Trust in social media, on the other hand, is up, signalling a possible move away from traditional state-owned media formats.

In April, only 23% of Russians said TV was the information source that they trusted the most, compared with 33% in March. Faith in TV fell most sharply in smaller towns.

The decline could partly be down to news fatigue driven by the preponderance of stories surrounding the Ukraine war. Updates on military positions and developments in Ukraine have dominated the news cycle in Russia, and have featured prominently in the popular talk shows of pro-Kremlin hawks like Vladimir Soloviev. Soloviev is known for his outspoken views, and has described Ukrainian President Zelenskiy as “a demon who should be exorcised rather than be negotiated with.”

Russia’s second most popular broadcaster, Channel One, has replaced some entertainment shows with extra current events shows, so that the entire day’s programme is filled with news, with the exception of a short mid-morning period. Of the ten most watched programmes in the first week of May, nine were news and current affairs shows, up from five a year earlier, according to the Economist.

The apparent shunning of TV news may also partly be down to western sanctions against buying advertising time on Russian networks, which is squeezing the funding of big TV channels like Channel One, Rossiya-1 and NTV. The advertising ban unveiled by the US Treasury on May 8 will deprive the channels of significant advertising revenue from companies like Pepsi and Procter & Gamble, both of whom have already announced that they will stop advertising in Russia.

On the other hand, trust in news on social networks, blogs and Telegram channels increased in April. The proportion of respondents who said that they would believe news from social media more than any other source increased from 19% to 23%.

Blocked sites like Instagram and Facebook can still be used in Russia by using a virtual proxy network (VPN) to circumvent internal blocks. Data firm Appfigures says that Russian downloads of the ten most popular VPNs reached 700,000 a day in the month after the start of the war, against just 16,000 a day the previous month.

Russians can also access a broad range of news sources using social media sites which haven’t been blocked, particularly the popular encrypted messaging service Telegram. Internet user numbers in Russia have been increasing since the start of a war. 68% of respondents now say they access the Internet every day.

Alongside the decreasing popularity of TV news, the proportion of Russians carefully following developments surrounding the war in Ukraine is also falling. Data from research organisation Levada Centre show that only 59% of Russians are currently following the events in Ukraine closely, down from 64% in March. Only 36% of those in the youngest demographic polled said that they follow the war.

In parallel with the cooling popularity of TV news, support for Russian military actions in Ukraine has also slipped – down to 74% from 81% in March, according to Levada Centre. In spite of this, 57% of Russians continue to blame Nato for the war, with only 8% holding Russia accountable.

Do you personally support the actions of the Russian military in Ukraine?

One intriguing dimension of the switch from state-managed TV news to more diverse online media is a corresponding decline in the number of Russians who believe that Russia is a dominant global force. Data from RIWI’s Cold War II Index show that Russians are becoming less likely to view Russia, China and their allies as having the upper hand in the global power struggle as the war progresses.

In April, 78% of Russian respondents said that Russia’s allies had the upper hand. Halfway through May, this figure was down to 74%, with over a quarter saying that the US, Europe and their allies were in the lead.

The Index, developed in collaboration with macroeconomist David Woo, draws on a unique technology which minimises biases associated with typical survey methods. Random Domain Intercept Technology (RDIT) intercepts web users who land on a dormant domain temporarily being managed by RIWI and presents them with a survey. The fact that any web user has a random chance of exposure to these questions means that the survey reaches those who are not ordinarily included in opinion polls. Unlike typical opinion polls, the RIWI survey does not collect identifiable information like email addresses and names, encouraging individuals to respond honestly.

With incentive bias eliminated and the likelihood of social desirability bias reduced, it is therefore possible to say with a degree of confidence that belief in Russian hegemony is declining among the Russian population.

It would be a mistake to attribute this solely to the growing popularity of social media as a source of news. Social networks also offer pro-Kremlin news angles for those who seek them out: Vladimir Soloviev’s Twitter account has 1.5mn followers; his Telegram channel has over a million.

Nor does the Russian viewer have to use social media for signs that all is not going to plan for the Russian military in Ukraine. Even state TV is beginning to show some pundits and speakers who question the war, or at least the extent to which it can be called a success.

Military analyst Mikhail Khodaryonok recently featured on leading state talk show “60 Minutes” with a negative evaluation of the war, predicting that “the situation will only get worse for us.” Khodoryonok, who is a retired colonel and defence columnist, added that “the main thing is to remain realistic from a political and military perspective. If you don’t, then sooner or later reality will come back so hard that you won’t know what’s hit you... The biggest problem with our military and political situation is that we are in total geopolitical isolation, and practically the whole world is against us, even if we don’t want to admit it. We need to get out of this situation.”

Meanwhile, Chechen leader Ramzan Kadyrov admitted at a televised event in Moscow that “this is not easy for our state, but it is a good experience.”

The shift in rhetoric coupled with the growing popularity of online news sources suggest that the tide of public opinion in Russia may be starting to ebb as the human, economic and political costs of the war get harder to ignore. But with the overwhelming majority still professing to support the war and dissenting voices silenced by a law which punishes ‘discrediting the armed forces’ with five years in prison, we should not expect an about-turn from the Kremlin any time soon.