The Taliban will be in sore need of legitimate funds with which to govern Kabul (pictured) and the rest of Afghanistan. / Weaveravel CC-BY-SA 4.0
By bne IntelIiNews September 18, 2021

Leaders of the countries that surround Afghanistan on September 17 at the Shanghai Cooperation Organisation (SCO) annual summit offered plenty of advice on what should be done to prevent the Afghans from descending into a humanitarian disaster and falling into an economic hellhole, but offered next to nothing by way of action. Instead they made it plain that the US and other Nato countries that last month completed their hurried withdrawal from Afghanistan must now bear responsibility for providing the stricken nation a chance of securing an acceptable future.

The financial fortunes of the Islamist fundamentalists that have taken over the country, the Taliban, are of course built on the production of opium and heroin. The Taliban are known as the world’s biggest drugs cartel and it was largely the illicit proceeds from the global trafficking of narcotics that financed the jihadist group’s 20-year fight to force the US and its allies to leave Afghanistan. The major headache now is that the funding needed to stop Afghanistan potentially turning into an incurable narco-state that is a hive for terrorism has been frozen by Washington and international financial institutions. Handing billions of dollars to an organisation like the Taliban, even though presently they alone can offer the outside world a governmental structure to work with in Afghanistan, is a rather difficult prospect to swallow for Western capitals. Nevertheless, SCO member states, including Russia, China, Pakistan and, quite vocally, Uzbekistan, urged the Western powers to do just that.

Addressing the SCO summit via video link, Russian President Vladimir Putin said that he believed it “makes sense to work with the United States [and] other Western countries for a gradual unfreezing of Afghanistan’s reserves and restoring programmes through the World Bank and the International Monetary Fund”.

Blaming Washington in large part for the dire straits besetting Afghanistan, Putin added: "The main part of the expenses related to Afghanistan's post-conflict rebuilding should be borne by the United States and Nato countries who are directly responsible for the grave consequences of their prolonged presence in the country." 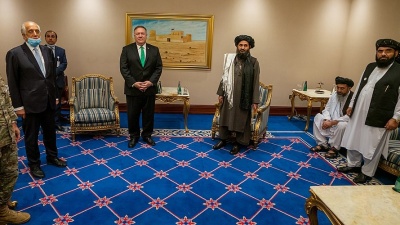 As the former Trump administration negotiated the US pullout from Afghanistan, the Taliban gained more and more legitimacy, but their interim government has not been recognised by the major powers. Ex-American secretary of state Mike Pompeo, third left, is seen meeting with Taliban leaders in Qatar in September 2020. (Image: US Dept of State, public domain).

Since Taliban militants swept into Kabul on August 15, around $9bn in foreign reserves of Afghanistan’s central bank have been placed out of reach, with most of the hard currency held in the US. The International Monetary Fund, the World Bank, foreign governments and other donors have, meanwhile, suspended payments to Kabul, and standard bank transfers to individuals in the country have been blocked, leaving ordinary Afghans reeling.

During the SCO summit, Putin’s Chinese counterpart, Xi Jinping, told a parallel summit of the Collective Security Treaty Organisation (CSTO) that without the necessary support, terrorism and drugs could flourish in Afghanistan, while the country could fall into a major humanitarian crisis.

That scenario is a big worry for the Central Asian nations bordering Afghanistan—Uzbekistan, Tajikistan and Turkmenistan—as well as Pakistan and Iran as it could raise the probability of a massive wave of Afghan refugees seeking to escape their country. All of these nations are SCO members (Iran announced it had won de facto membership on September 17), and given that the SCO was formed two decades ago partly to fight the threat of terrorism taking root in member states, the summit was a good opportunity to caution against neglect that could allow the worst-case scenario to become a reality.

Mirziyoyev, calling for talks between the SCO bloc and the Taliban and for efforts to prevent the rise of extremism, said: "Considering the humanitarian situation, we propose looking into the possibility of lifting the freeze on Afghanistan's accounts in foreign banks."

Imran Khan, the prime minister of Pakistan—often under fire for having supported the Taliban behind the scenes over the years, something Islamabad denies—added to the call for economic support for Afghanistan, a country that has observer status in the SCO.

"Urgent priorities are to prevent a humanitarian crisis and an economic meltdown. We must remember that the previous government depended heavily on foreign aid and its removal could lead to economic collapse," he said. "Going forward, we believe positive engagement of the international community with Afghanistan is extremely important."

The summit was held in Dushanbe, capital of Tajikistan, a country that, like Iran, is a Persian-speaking nation. The Tajiks and Iranians are thus particularly concerned over the fate of Afghan minorities with close linguistic and ethnic ties. They are threatened by the harsh rule of the Taliban, a force that emerged in 1994 in eastern and southern Pashtun areas of Afghanistan. Slightly more than a quarter of Afghanistan’s population of 38mn are Tajiks.

Tajik President Emomali Rahmon called for member countries of the SCO and the CSTO to create a "reliable security belt around Afghanistan to stop the possible expansion of terrorist groups" in the region.

"The current developments and the high risks of a catastrophic scenario confirm the necessity of helping countries bordering Afghanistan," Rahmon told the Dushanbe SCO gathering on September 17, as reported by Reuters.

The "entire burden of negative impacts" following the withdrawal of the international coalition from Afghanistan "will be placed on Afghanistan’s neighbouring countries," continued Rahmon, adding: "Contrary to their statements, the Taliban are following the path of creating an Islamic emirate with rules that are foreign to the modern era and the government they formed consists of their members only."

He urged a strengthening of the capabilities of the SCO's regional anti-terrorist structure and of "the interaction of our countries' law enforcement agencies and special services" in order to counter "challenges and threats" emanating from Taliban-led Afghanistan.

Rahmon also outlined his serious concerns over the situation in Panjshir Valley, where resistance forces hidden in the mountains form the last pocket of resistance to the Taliban takeover. He reiterated his call for the international community to provide emergency assistance to the province, which he said has been under a "complete [Taliban] blockade for about two months".

Khan added his voice to the calls for the Taliban to create an "inclusive political structure" representing all ethnic groups, while preventing Afghan soil from being used for international militancy, but such advice has so far fallen on deaf ears in Kabul.

Putin noted that the new government was only provisional, concluding: "One cannot call it representative or inclusive, as we do not see representatives of other ethnic groups there. But we believe we need to work with it."