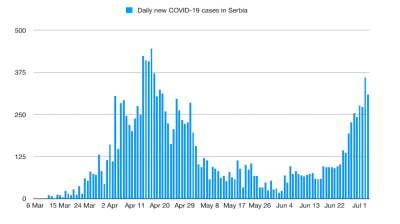 Serbia’s government declared a state of emergency in the capital Belgrade, where the number of new coronavirus (COVID-19) cases has been rising sharply in recent days, on July 3.

The country is facing a significant rise of new confirmed cases with around 80% of them in Belgrade in the last few days.

To contain the spread of the virus in Belgrade, the government has closed all night clubs and restaurants between 11pm and 6am. It has also banned public gatherings of more than 100 people in closed areas and above 500 people in outdoor areas.

In public gatherings, a distance of 1.5 metres between people should be kept. Face masks are obligatory in public transport and all indoor public facilities.

The measures have been imposed until July 18.

Serbia declared a state of emergency over the coronavirus in mid-March, but ended it on May 6, subsequently lifting almost all restrictions.

In June, BIRN reported it had information showing that Serbia had covered up the real number of new cases for several days and reported around 90 patients a day, while the real number was between 300 and 340. There has been no confirmation of this so far.

Meanwhile, on July 3 Serbia’s President Aleksandar Vucic said that the government will not add new measures to support business during the coronavirus-related economic crisis. The government has already adopted a €5.1bn package to support companies and individuals.